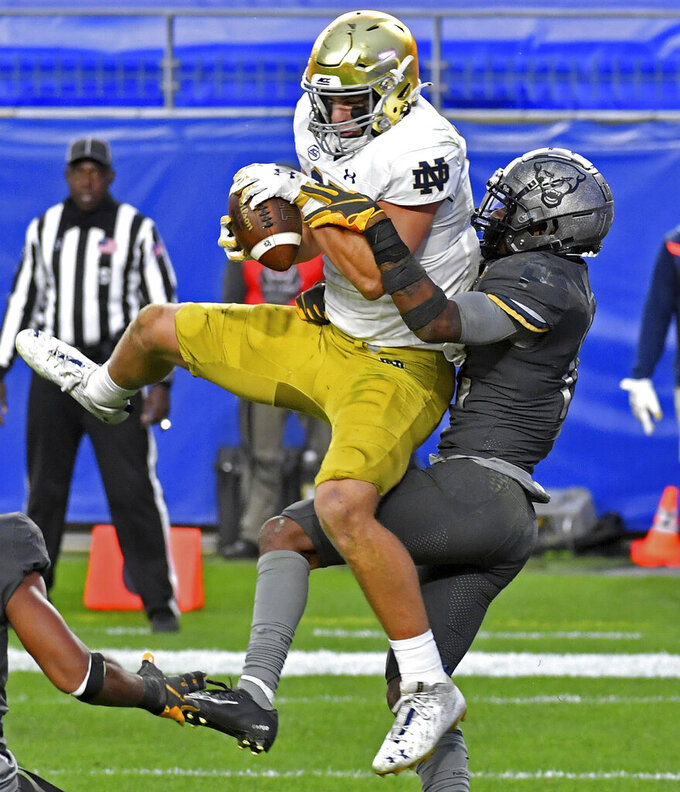 Notre Dame tight end Michael Mayer pulls in a ball for a touchdown against Pitt defensive back Paris Ford in the second half of an NCAA college football game Saturday, Oct. 24, 2020, in Pittsburgh. (Matt Freed/Pittsburgh Post-Gazette via AP) 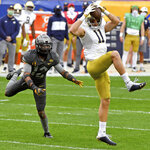 Coach Pat Narduzzi confirmed Monday that Ford, a redshirt junior, has opted out of the Panthers' final four games.

“Paris is a tremendous football player, a tremendous person,” Narduzzi said. "We wish him all the best in his endeavors as he moves on through this football world and the rest of his life.”

Ford spent a portion of the offseason wavering between playing and sitting out before joining the Panthers following a breakout 2019 in which he was an All-Atlantic Coast Conference selection after collecting three interceptions to go along with a team-high 97 tackles.

“All along, Paris has had these thoughts in his mind going back to last year in February when he decided to stay, and then there’s all the opting out going on in the middle of summer during camp,” Narduzzi said. “So he took a few days back then to think about it long and hard.”

Ford had three picks and 45 tackles for the Panthers (3-4, 2-4 ACC), who have dropped four straight following a 3-0 start heading into Saturday's visit to Florida State (2-4, 1-4). His is the second high-profile departure for Pitt's defense. Defensive tackle Jaylen Twyman, an All-American in 2019, decided over the summer to take the season off and prepare for the NFL draft.

Narduzzi said he does not believe Pitt's slide played a factor into Ford's decision to move on. Asked if he believes Ford will be the last player to opt out, Narduzzi said: “I don't see that at all. But you know, I don't have a crystal ball, and you never know."

Redshirt freshman Brandon Hill will get the first crack at replacing Ford. Hill had a season-best 5 1/2 tackles in a lopsided 45-3 loss to Notre Dame on Oct. 24.

“He’s a playmaker,” Narduzzi said of Hill. “He’s physical, he’s strong and he’ll be the guy that will line up and play in that position as we sit here today.”

While Hill is likely to start, senior quarterback Kenny Pickett is likely to miss his third consecutive game while recovering from an ankle injury. Pickett has been cleared to throw but mobility remains an issue, meaning redshirt freshman Joey Yellen will get the start in Pickett's place. Yellen has completed 34 of 76 passes for 397 yards with a touchdown and three interceptions this season after transferring from Arizona State.