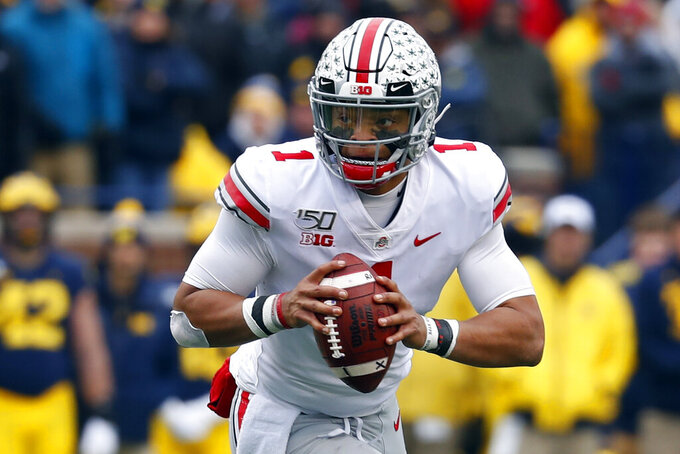 FILE - In this Nov. 30, 2019, file photo, Ohio State quarterback Justin Fields rolls out to throw against Michigan during the first half of an NCAA college football game in Ann Arbor, Mich. Ohio State opens preseason training camp on Thursday, Aug. 6, 2020, with strict coronavirus protocols in place and under a cloud of uncertainty about whether a revised 10-game season will even be played at all. (AP Photo/Paul Sancya, File)

COLUMBUS, Ohio (AP) — The Big Ten and Pac-12 postponing their fall football seasons because of the coronavirus pandemic leaves some NFL prospects facing a dilemma: Leave now or leave later.

Take Ohio State quarterback Justin Fields, a Heisman Trophy finalist last year who would have begun the season as one of the favorites to win in 2020. He will be eligible for the NFL draft and almost certainly will be a top 10 pick whether or not he plays another down of college football.

But he's already worked hard preparing for this season, and the Buckeyes were expected to be one of the top two or three teams in the nation. There might still be a Big Ten football season to play in the winter -- Fields’ coach, Ryan Day, is pushing hard for one -- but the logistics could take weeks or months to figure out.

Other players, like Purdue receiver Rondale Moore, Penn State linebacker Micah Parsons and Virginia Tech cornerback Caleb Farley, didn't want to wait around. They announced they were opting out before the Big Ten decided to abandon the fall season.

“From a business point of view, there is little reason for (Fields) to continue playing in the spring,” said Andrew Brandt, a former Green Bay Packers executive and NFL agent who now directs Villanova’s Moorad Center of Sports Law. “That, of course, doesn't take into his account his interest of being part of a college program, playing for his school and all those emotional things.”

Day is counting on those things to pull on Fields, who transferred from Georgia before last season, and some of his draft-eligible teammates as the coach tries to persuade and them to stay around to see what happens next. But he stressed that the university and Big Ten can't waste any time figuring out the next step.

“I think Justin wants to see what the schedule is,” Day said. “And I think it’s our job, and we owe it to these guys to make sure that we do put the schedule out and put the plan in quickly here so guys like Justin can plan for his next year, next few months.”

Fields hasn’t said anything publicly about his plans since the Big Ten’s decision was announced Tuesday but was a leading voice in last week's lobbying effort by players to save the season.

“Regardless of what happens, the NFL draft is going to be next spring. So we have everything in place here in Columbus to help these guys,” Day said. "In a normal cycle, they wouldn’t be leaving anywhere until January anyhow. So to go somewhere right now to me doesn’t make a lot of sense when we have everything you need right here.”

UCLA coach Chip Kelly said it is hard to know how to advise players at this stage because there are so many unknowns, including the transfer situation and the logistics of possibly playing two football seasons in the 2021 calendar year.

“There’s a lot that’s new right now,” Kelly said. “Everyone is continuing to gather information right now along with our friends in the Big Ten. Really what does the NFL or other three Power Five conferences do?