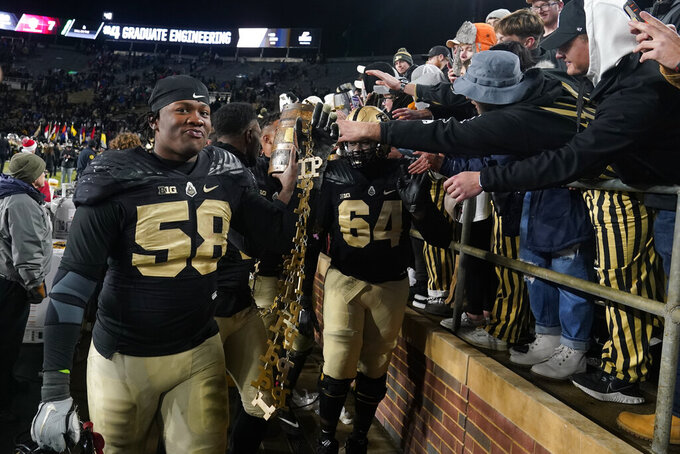 He may have closed it out Saturday with an unforgettable performance.

The fifth-year senior matched his career high by throwing for four touchdowns, helping the Boilermakers set a single-season team record for completions and bringing back the Old Oaken Bucket for the first time in three years with a 44-7 victory over rival Indiana.

“He stands in there, makes throws, sees things and has distributed it pretty dang well good the last few games," coach Jeff Brohm said. “He's come this far through some of our help but really it's a credit to him and his work ethic."

O'Connell has been sensational lately, throwing 15 TD passes and no interceptions in the last five games — leading Purdue to four wins. That run has given the Boilermakers (8-4, 6-3 Big Ten) their highest single-season victory total since 2006, their first Bucket win since 2018 and their most lopsided in the rivalry since a 62-10 victory in the late Joe Tiller's final game as Purdue coach.

With one game left this season, and perhaps another season also in 2022, O'Connell now holds the school's single-season and career records for completion percentage at 73.5% and 69.3%, respectively.

He got plenty of help from his teammates in the annual rivalry, which was canceled twice last season because of COVID-19. This time, the traditional themes returned — big plays, hard hits, loud chants and plenty of penalties on a rainy, windy afternoon that eventually gave way to clearing skies as night fell over cold, sold out Ross-Ade Stadium. And the Boilermakers wasted no time rushing to reclaim the prized trophy.

“It was a great day to be a Boilermaker," Brohm said, citing some wins by other Purdue teams Saturday. “It’s a big win. We challenged our guy to come out and play a better second half. We thought we were a little sloppy in the first half and we did."

For Indiana (2-10, 0-9), it was more frustration in a season full of disappointment. The Hoosiers lost their final eight games and finished their first winless season in league play since 2011.

“We've got to make sure we fix the things that are part of the problem of how this occurred," coach Tom Allen said. “I thought there was a lot of execution things that hurt us, like the snap over (quarterback Grant Gremel's) head. But the buck stops with me."

Purdue took control quickly when Zach Horvath opened the scoring with 1-yard TD plunge. Indiana tied the score on a 2-yard run from Donaven McCulley and then O'Connell was off and throwing.

He broke the tie with a 24-yard TD pass to Paul Piferi early in the second quarter and broke open the game with TD throws on Purdue's first two second-half possessions — 21 yards to Jackson Anthrop and 5 yards to T.J. Sheffield — to make it 31-7.

O'Connell finished 26 of 31 with 278 yards while David Bell had six catches for 79 yards and one score in what could also be his final home game. Bell, a junior, is considered a top NFL prospect.

Indiana: After posting their best season in more than a half century, the Hoosiers opened this season with so much promise. A brutal schedule, a rash of injuries and some bad luck ruined everything.

Purdue: The Boilermakers made it look easy again Saturday — completing a surprise turnaround behind O'Connell and a rebuilt defense. Eight wins should be enough to get Purdue into a respectable bowl, it's first postseason trip in three years.

Indiana: Gremel became the fourth starting quarterback for the Hoosiers this season and finished 18 of 30 with 147 yards and an interception. ... Peyton Hendershot had six catches for 41 yards and Ty Fryfogle finished the season with two receptions for 19 yards. ... Indiana scored 11 touchdowns in nine conference games.

Purdue: O'Connell became the first Boilermakers player with20 TD passes in a season since David Blough in 2018. He now has 23. ... The six conference are their most since 2003. ... Purdue broke the school's single-season team record for completions (381). The previous mark was 377 set in 1998.

Indiana: Must decide what changes will be needed to get the program back on track in 2022.

Purdue: Will find out its postseason fate next weekend.