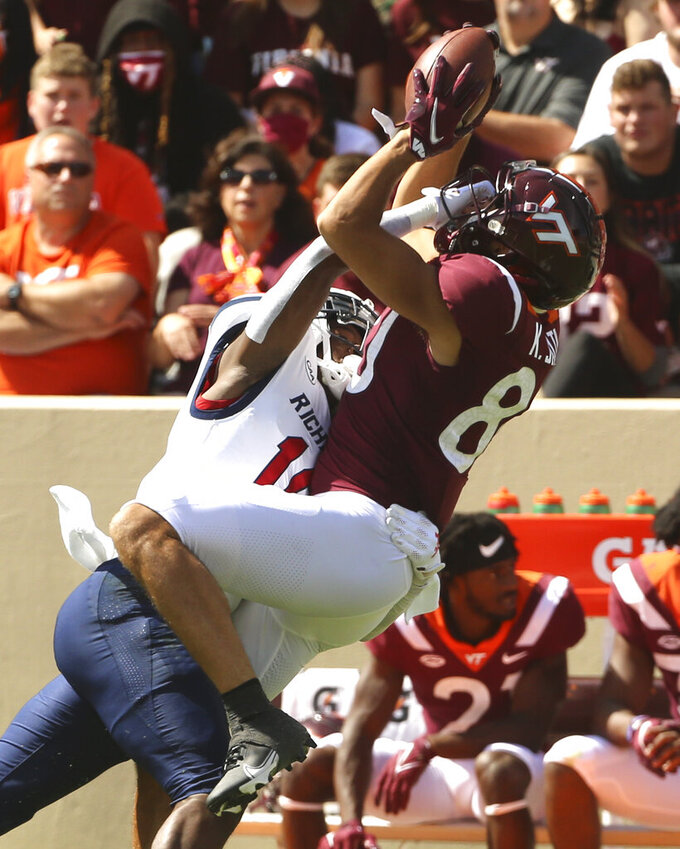 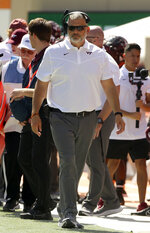 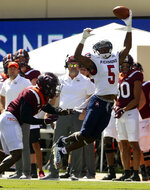 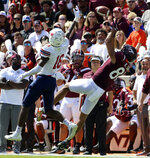 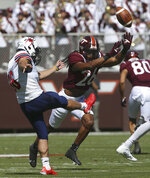 BLACKSBURG, Va. (AP) — Braxton Burmeister threw for 212 yards and a touchdown to lead Virginia Tech to a 21-10 victory over Richmond on Saturday.

Tayvion Robinson added a 60-yard punt return for a score for the Hokies (3-1), who struggled against a Richmond team that played nearly the entire game without starting quarterback Joe Mancuso (injured hand).

“Our guys played hard. They were ready to play,” Virginia Tech coach Justin Fuente said. “Defense was good. Offense struggled. We were pretty inconsistent, to say the least.

“We’ve played two pretty good defensive lines the past two weeks, but that being said, we’ve been inconsistent. At times, it’s been pretty good, but not nearly consistent enough to score like we’re going to need to score as the season goes along. We’ve got a huge improvement to make … As a whole, we’ve got to find a way to play better.”

Burmeister threw a 10-yard touchdown pass to Tré Turner on the opening possession of the game to cap a 65-yard drive — the Hokies’ best of the game. An Aaron Banks interception led to Richmond’s only touchdown, with Savon Smith scoring on a 16-yard run to tie the game in the second quarter.

Robinson’s touchdown and a 1-yard score by backup quarterback Connor Blumrick were enough for Virginia Tech to register the win.

Turner caught six passes for 102 yards for the Hokies, who amassed just 318 yards.

“It’s really us just beating ourselves,” Turner said. “It’s little things. Like one player will mess up a play and that messes up the whole operation for the offense. Execution is what our coaches preach every day. If we don’t execute, all 11 guys on offense, the plays most likely aren’t going to work.”

Beau English II completed 15 of 23 for just 77 yards passing to lead Richmond, which finished with only 237 yards.

“We’re disappointed,” Richmond coach Russ Huesman said. “We wanted to win the game. We didn’t know how it would transpire, but we came in and we practiced to win.”

Richmond: The Spiders played well enough on defense to make this a game, but struggled without Mancuso, who injured his throwing hand on Richmond’s second play and didn’t return. Richmond did not have a play longer than 16 yards following Mancuso’s injury. The Spiders will need to find some ways to move the ball if Mancuso is out for an extended period.

Virginia Tech: This was an uninspired performance by the Hokies, who were looking to bounce back following last week’s close road loss to West Virginia. Virginia Tech looked lost on offense, barely rushing for 100 yards against an FCS team and struggling on third down (6 of 13). The Hokies need to find some offense before a visit from Notre Dame on Oct. 9.

On one possession in the second quarter with Virginia Tech at its 6-yard line, Fuente inserted backup quarterback Knox Kadum to get him some experience. On second-and-10, Kadum threw an interception that ultimately led to Richmond’s lone touchdown, and many questioned Fuente’s decision to put Kadum, who has played in two games in his career, in that situation.

“On first down, we run the ball. We don’t help ourselves, don’t get north and south, and all of the sudden, we’re in second-and-long, and Knox is in a tough situation, backed up and in second-and-long,” Fuente said. “But that’s part of being a quarterback, too, is being disciplined enough to throw the ball away and live to go play the next down.

“I wish it would have turned out differently for him, but where the ball was should be inconsequential to how he performs.”

Richmond: The Spiders play at home against Elon next Saturday.

Virginia Tech: The Hokies are off next week before playing host to No. 12 Notre Dame on Oct. 9.