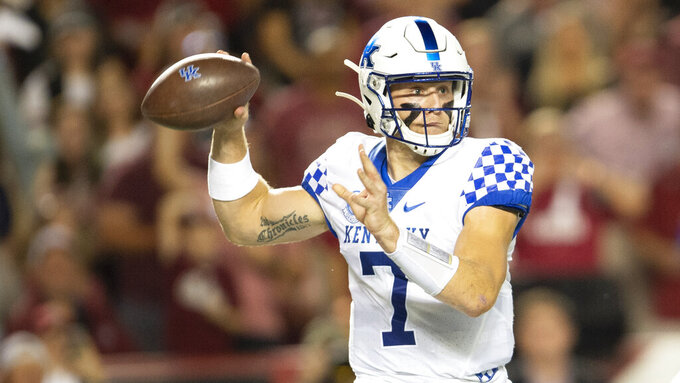 Kentucky quarterback Will Levis attempts to pass in the first half of an NCAA college football game against South Carolina, Saturday, Sept. 25, 2021, at Williams-Brice Stadium in Columbia, S.C. (AP Photo/Hakim Wright Sr.) 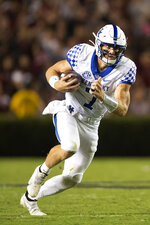 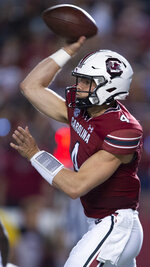 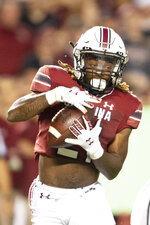 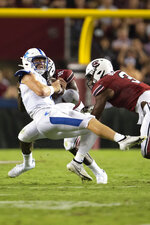 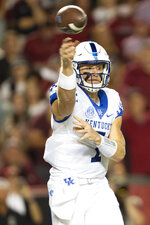 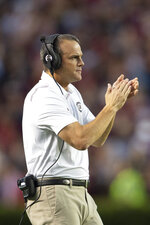 Despite its three turnovers, Kentucky (4-0, 2-0 Southeastern Conference) beat South Carolina (2-2, 1-1) for the seventh time in eight years, and set up a collision course toward next week's matchup at home against No. 11 Florida.

“We just have to worry about ourselves. We got to prove to each other and the team that we can go out there and compete with anybody who steps on the field,” said Kentucky linebacker DeAndre Square, who led the Wildcats with eight tackles. “It’s not about anybody else, it’s about us.”

Chris Rodriguez Jr. ran for 144 yards on 26 carries for the Wildcats. Will Levis was 15-of-22 passing for 102 yards and threw an interception.

Kavosiey Smoke scored on 15-yard touchdown run on the first series of the game, capping a 12-play, 75-yard drive for Kentucky. Ruffolo's 41-yard field goal to end the second quarter gave the Wildcats a 10-0 lead.

Luke Doty threw a threw a 5-yard touchdown pass to Jalen Brooks early in the third quarter for South Carolina. Ruffalo made field goals from 21 and 27 yards before Parker White's 54-yard field goal capped the scoring with 2:31 remaining.

South Carolina recovered fumbles on back-to-back Kentucky possessions but couldn’t get any points despite going for it twice on fourth down. Each time, a dropped pass ended the drive.

“If you just look at some things, our turning the ball over, there’s no excuse for it. The ball bouncing to the other team sometimes, there’s no controlling that,” Kentucky coach Bob Stoops said. When I first got here, we couldn’t play a lick of defense, but we led the country in fumbles. With some of those fumbles (this year), we just can’t do it.”

The Gamecocks’ defense has recovered multiple takeaways in every game but the offense hasn’t been able to take advantage. After scoring 46 points over hapless Eastern Illinois in its opener, South Carolina has a mere 43 points since.

FUMBLES YET STILL THE CLOSER

Chris Rodriguez has battled fumble-itis all season and put the ball on the deck twice on Saturday, yet the Wildcats recovered both times.

“I can’t make an excuse for him. It’s not acceptable for him. He’s played too much football for us, and we rely on him. I count on him,” Stoops said. “He once again iced the game by getting tough yards when everybody in the stadium knew we were going to him.”

South Carolina: The Gamecocks’ offense continues to sputter, unable to get any kind of rushing attack started despite the presence of Harris and a healthy Doty under center after he was banged up the first three games. The Gamecocks had 216 yards of offense with just 58 yards on the ground against the Wildcats on Saturday.

Kentucky: The Wildcats have sneakily become the third-best program in the SEC East behind Georgia and Florida. It could be an interesting three weeks as Kentucky plays the Bulldogs and Gators to see who goes to Atlanta for the SEC Championship Game.

South Carolina: Hosts Troy next Saturday in the Gamecocks’ third nonconference game of the season.

Kentucky: Hosts No. 11 Florida next Saturday in its fourth home game in five weeks. The Wildcats broke a 31-year losing streak against the Gators in 2018 but have lost the last two in the series.