In the SEC, defense reigns again with Georgia, Bama on top 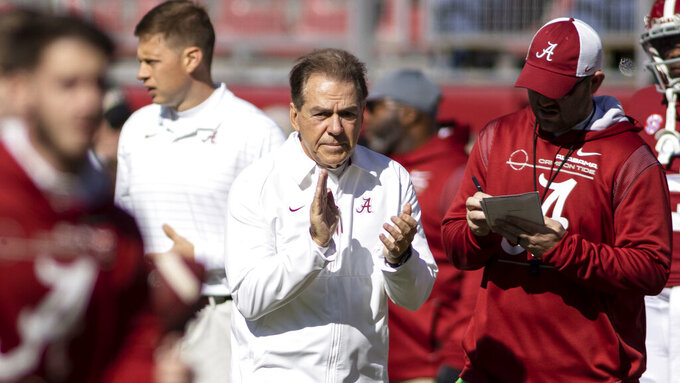 Alabama coach Nick Saban and Georgia's Kirby Smart are not exactly known as quarterback whisperers, or the types of cutting-edge offensive innovators that get a ton of attention in college football these days.

They both cut their teeth on the defensive side of the ball, and they continue to make their ability to field elite defenses a big part of their formula for maintaining consistently elite programs in the Southeastern Conference.

After 10 games this season, Georgia and Alabama are the top two defensive teams in the SEC and also sit atop the conference standings — again. Georgia also is first, and Alabama second, in the College Football Playoff rankings.

“You have to play good defense to give yourself a chance to win — try to keep from getting beat before you actually do win the game,” said Alabama coach Nick Saban, a former college defensive back at Kent State who spent much of his early coaching career as a defensive assistant at several major college programs as well as with a pair of NFL teams.

“As a defense, we talk about getting back to that ‘Bama Standard,’” defensive lineman Phidarian Mathis said. “Everyone knows what the Alabama defense used to be. That was our main goal for the off-season, living up to the standard that Alabama defense has always been.”

Mississippi (8-2, 4-2), which leads the SEC in total offense with 522.2 yards per game, hasn’t looked quite ready to challenge for conference supremacy. When the Rebels met the Crimson Tide earlier this season, Alabama won 42-21.

Mississippi State coach Mike Leach's “Air Raid” offense is putting up an SEC-high 379.9 yards passing per game this season, but his Bulldogs (6-4, 4-3) are on the brink of elimination from the SEC West race.

And when it comes to defensive personnel, Alabama and Georgia have some of the best. Georgia defensive tackle Jordan Davis and Alabama outside linebacker Will Anderson Jr. are widely regarded as the top two defensive players in the country.

Anderson has 12.5 sacks and 24 tackles for loss – both national bests in 2021. He also has been a force in the Crimson Tide’s rush defense, helping the unit rank fourth nationally, allowing just 83.5 yards per game. And by the Alabama coaching staff's count, Anderson has pressured quarterbacks 34 times.

The 6-foot-6, 335-pound Davis has 23 total tackles and two sacks. But more importantly, he has consistently disrupted opposing offenses by making quarterbacks uncomfortable and plugging up run gaps.

“They are able to really get after the quarterback, and if you look at the numbers, a lot of their sacks are three-man and four-man rushes,” Drinkwitz said. “That’s pretty impressive. Not a lot of teams are able to do that.”

Georgia already has won the SEC East, meaning it will appear in the SEC title game for the fourth time in six seasons since Smart left his old job as Alabama defensive coordinator under Saban to become the Bulldogs' head coach.

Alabama, which hosts Arkansas on Saturday, is one victory away from winning the SEC West for the ninth time since Saban arrived in 2007. And in 2011, when Alabama failed to win the West because of a 9-6 overtime loss to LSU, the Tide still went on to win the national title that season.

Since Saban arrived at Alabama in 2007, the Crimson Tide has recorded 24 shutouts, including 12 in SEC play. With its 41-0 win over Mississippi State on Halloween night of last season, the Crimson Tide defense has 10 more shutouts than any other team in the nation over that span (Ohio State is second with 14).

“I don’t think there’s a set formula anymore for who has the best chance to win, but I do think playing good defense certainly contributes to it in a positive way,” Saban said.