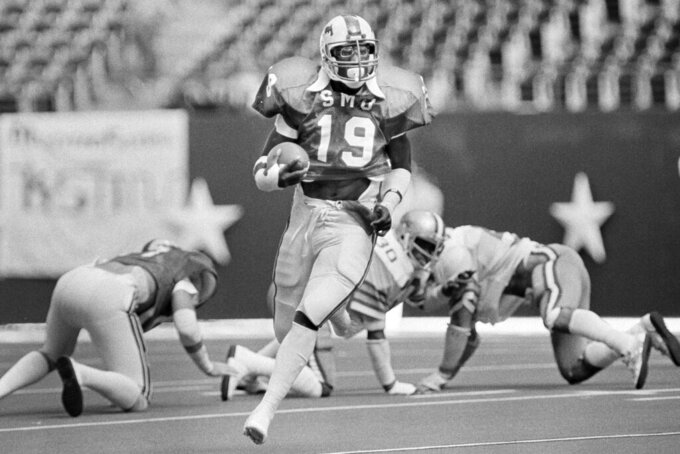 FILE - SMU's Eric Dickerson (19) runs the ball against against Rice during the first half of an NCAA college football game at Texas Stadium in Irving, Texas, Nov. 7, 1981. The former SMU running back, who played for the Mustangs from 1979-82, was one of 27 players invited to the Tuesday, Dec. 7, 2021, induction ceremony for the College Football Hall of Fame in Las Vegas. Dickerson was voted into the 2020 class, but the ceremony was canceled due to the pandemic. (AP Photo/David Breslauer, File)

LAS VEGAS (AP) — Make no mistake. Eric Dickerson is glad to be going into the College Football Hall of Fame after all these years. He will take the stage and be cemented in the sport’s lore.

“Am I happy to be here? Yeah,” Dickerson said Tuesday. “Do I really care? No, honestly.”

The former SMU running back, who played for the Mustangs from 1979-82, was one of 27 players invited to Tuesday's induction ceremony in Las Vegas. Dickerson was voted into the 2020 class, but the ceremony was canceled due to the pandemic.

It’s an honor long overdue to Dickerson. The Pro Football Hall of Famer ran for 4,450 yards and 47 touchdowns at SMU, going from a 5-6 team as a freshman to an 11-0-1 club that won the Cotton Bowl his senior year.

But the school's reputation was tarnished after the NCAA handed down the “death penalty” in 1987 for multiple violations that occurred before Dickerson arrived at SMU, up until 1986. Part of that controversy was Dickerson being given a sports car at around the same time he committed to Texas A&M before ultimately switching to SMU.

Dickerson has maintained the car was a gift from his grandmother.

“We had nothing to do with that death penalty,” Dickerson told the AP, referring to himself and “Pony Express” teammate Craig James. “That’s the travesty of the whole deal. People have the tendency to think I had something to do with it. We were a bunch of young kids.”

By the time the NCAA punished SMU, Dickerson was already a record-breaking running back in the NFL. His 2,105 rushing yards in the 1984 season, his second with the Rams, is still the league’s single-season record.

Dickerson was elected to the Pro Football Hall of Fame in 1999 after finishing his 12-year career with 13,259 yards, currently ninth-best in NFL history.

“It’s bittersweet,” he said. “I look at my university because they made us like the black eye of the NCAA. And I just don’t like that. I’m honest about it.”

Dickerson is still proud to be an SMU alum and appreciative for the school to helping him and his family get to Las Vegas for the opportunity, even if it’s almost 40 years since he played football in Dallas.

“I know why they held me out because of the death penalty, but I’m proud of my school,” Dickerson said. “Leaving college, most of these kids don’t have anything. And that’s their opportunity to help themselves and get an education if they don’t play football. I didn’t have a plan to play professional football. It just broke out.

“The truth is going to always come out. I’m really happy to represent my university and I’m proud of it. I’m glad I went to SMU.”

Romo’s rise from undrafted small school quarterback to Dallas Cowboys starter might not have happened in his coach at Eastern Illinois had his way. Romo said Bob Spoo tried to convert him to tight end after his freshman year.

“I tell Coach Spoo, when we look back, I was like, ‘Are you really that good at talent evaluation?’” Romo recalled. “He’s like, ’You got me there, Tony. That’s a good call.'

“He was right, though, because when I came in as a freshman, I was a terrible thrower of the football. I remember after that first year, he goes, ‘Tony, we’re thinking of moving you to tight end.’ I said, ‘Just give me three months. If I don’t come back better or I haven’t improved, we can have this discussion again.’”

Romo went on to be a three-time Ohio Valley Conference Offensive Player of the Year from 2000-02, throwing for 7,816 yards and 82 touchdown passes. He won the Walter Payton Award in 2002 for being the best offensive player in college football.

He went undrafted in 2003, but went on to play 13 seasons with the Dallas Cowboys.

“That really set the stage for my work ethic the rest of my life,” Romo said.