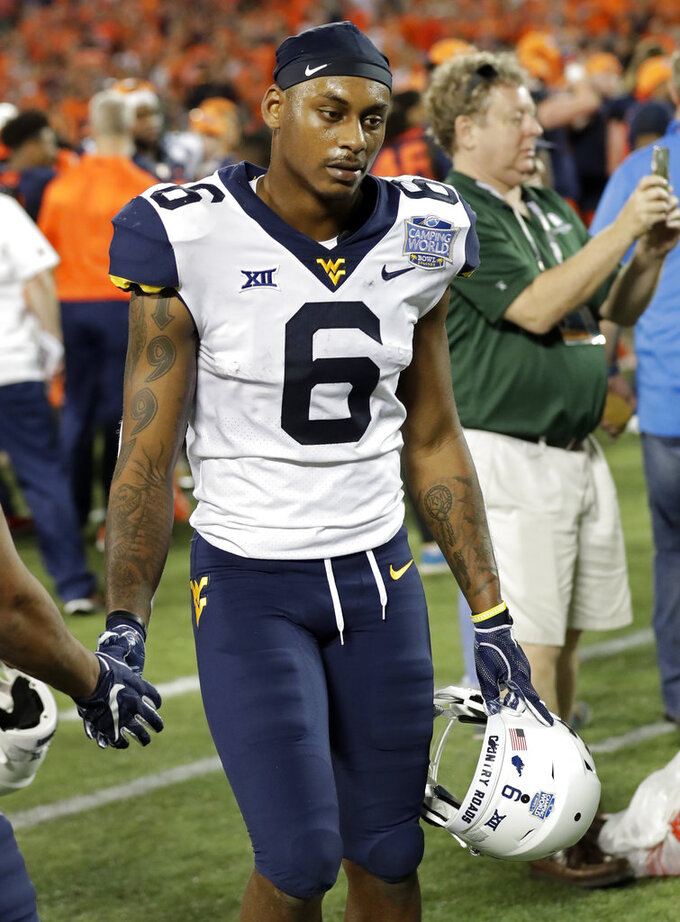 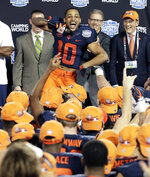 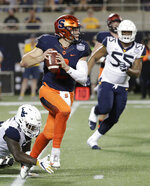 ORLANDO, Fla. (AP) — Syracuse sent Eric Dungey out a winner, and got a good look at its future.

Dungey capped his record-setting college career by throwing for 303 yards, Abdul Adams and Trishton Jackson combined to score three touchdowns in their Syracuse debuts and the 17th-ranked Orange got their first 10-win season since 2001 by topping No. 15 West Virginia 34-18 in the Camping World Bowl on Friday.

"The trophy is really, really heavy," Syracuse coach Dino Babers said. "And I'm glad we got it."

The Orange ended with a flourish, too: Down 18-17 going into the final quarter, they scored 17 points in the first 5:01 of the fourth.

Adams rushed for two first-half scores, and Jackson hauled in a TD pass from Dungey on the first play of the fourth quarter for Syracuse (10-3), which survived a game that featured eight lead changes. Adams (from Oklahoma) and Jackson (from Michigan State) are transfers who had to sit out a year, which by NCAA rule was satisfied at the end of the first semester.

Their touchdowns counted; their year will not. Under the new NCAA rule on redshirting, Adams and Jackson still have two remaining seasons of eligibility, and both are expected to play big roles for the Orange in 2019.

"It's going to be fun to watch Syracuse in the future," Dungey said.

Jack Allison, making his first collegiate start because West Virginia star quarterback Will Grier elected to skip the bowl game and focus on preparing for the NFL, completed 17 of 35 passes for 277 yards for the Mountaineers (8-4). Besides Grier, West Virginia was also without two of his three top targets this season — Gary Jennings was ruled out long ago with an ankle injury, and Marcus Simms was a surprise scratch.

"I can make a bunch of excuses," West Virginia coach Dana Holgorsen said. "We played a good team. Give Coach Babers a lot of credit. They played good all year."

Kennedy McCoy had a 3-yard touchdown run for West Virginia on a direct snap, and Evan Staley made four field goals for the Mountaineers.

Kendall Coleman had three sacks for the Orange. Andre Szmyt made a pair of field goals for Syracuse, ending his freshman season with 30 — one shy of the Football Bowl Subdivision record set in 2003 by Georgia's Billy Bennett.

Syracuse: Dungey came into the game holding or sharing 18 Syracuse records, and got another one in his collegiate finale. He passed Ryan Nassib (9,190) for most passing yards in Syracuse history, finishing his career with 9,340. "The only thing I care about is we got to 10 wins for the first time since 2001," Dungey said. ... Adams said he learned midseason that he could play in the bowl game. "I knew I would be ready," he said.

West Virginia: The Mountaineers fell in a bowl game for the third consecutive season, but probably have a good idea about their starting quarterback in 2019. Allison had nine completions go for more than 15 yards.

Syracuse will end the season in the AP Top 25 for the first time since 2001, when it finished No. 14. The last time the Orange finished a season higher than that was 1992, when they were No. 6.

Staley came in as one of 13 major college kickers to be 75-for-75 or better on extra-point tries over the last two seasons. He missed his first PAT attempt Friday, the ball bouncing off the right upright. Going back to his senior high school season, Staley — who was only 7 years old when he told late coach Bill Stewart that he was going to West Virginia — had made 101 consecutive PAT tries.