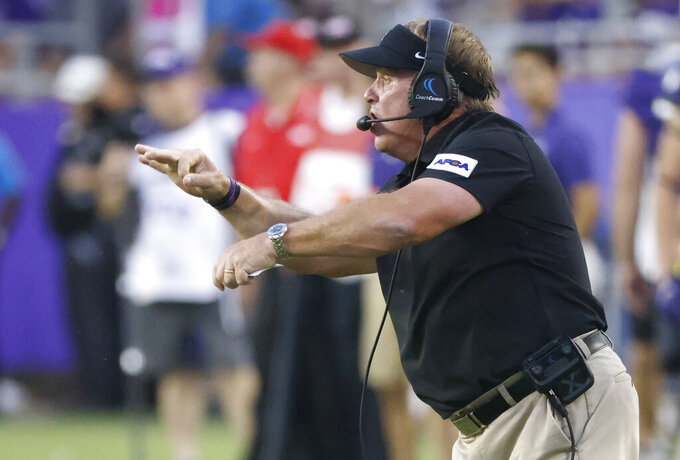 TCU head coach Gary Patterson calls a play against Duquesne during the second half of an NCAA college football game Saturday, Sept. 4, 2021, in Fort Worth, Texas. (AP Photo/Ron Jenkins)

FORT WORTH, Texas (AP) — TCU coach Gary Patterson has never lost to a Pac-12 team, surviving a few overtime games through the years and an interception-filled postseason game against California.

That bowl game three seasons ago was TCU's only previous meeting against the Golden Bears (0-1), and its last against a Pac-12 team until hosting them on Saturday.

Patterson still had a thick file to prepare for Cal's offense and emphasized that by holding up his left hand with his thumb and index finger stretched as far apart as possible.

A year ago, TCU (1-0) had prepped for a scheduled 2020 opener that was supposed to be the Cal debut for offensive coordinator Bill Musgrave after 20 NFL seasons and being an OC for five different teams. Fifth-year Bears head coach Justin Wilcox was previously a defensive coordinator like Patterson, with a stint at Boise State and back-to-back bowl games against the Frogs more than a decade ago.

TCU’s planned trip to the West Coast last September didn’t happen because of the pandemic.

“I don't know if you can say how different they are. Defensively, they're the same," Patterson said. “Offensively, even when we were breaking them down two years ago, we thought there were a lot of similarities. ... We broke them down all the way back to the (Denver) Broncos, where he was before as an assistant.”

There were nine interceptions in the 2018 Cheez-It Bowl that TCU won 10-7 in overtime. The Frogs are 7-0 against the Pac-12 in Patterson's 21 seasons, with the only game on their campus being against Stanford in 2008. They had a three-OT win over Oregon in the 2016 Alamo Bowl, and won in OT at Arizona in 2003.

The Frogs have a four-game winning streak after beating FCS team Duquesne 45-3 in their opener. They have won six of seven overall.

Cal and fourth-year quarterback Chase Garbers got off to a fast start in their opener against Nevada with long TD drives the first two times with the ball. The Bears led 14-0 after gaining 135 yards on 24 plays (13 runs and 11 passes) in more than 13 minutes. They then punted on five consecutive drives, four of them three-and-out, and gained only 190 yards the final nine drives in a 22-17 loss.

“Really for the second and third quarters, we really didn’t get much rhythm at all. In the second quarter, I think we only ran nine plays on offense,” Wilcox said. “There were chances to convert and get first downs, we weren’t able to do that, unfortunately. That kind of bled into the third quarter.”

Cal hasn’t lost each of its first two games in consecutive seasons since starting 0-2 in both 1994 and 1995. They Bears lost their first three games while going 1-3 last season. This year’s opener was their first loss in 10 regular-season non-conference games since Wilcox’s debut in 2017.

TCU and Cal both have multiple options running the ball.

Each of TCU's top four running backs had 5-10 carries in the opener, and three of them scored TDs.

“We find out who the hot hand is," Patterson said. “You can rotate guys and you’re not going to be tired. And they can also play on special teams a little bit more.”

Sophomore Damien Moore led Cal with 79 yards and a TD on 15 carries in the opener. DeCarlos Brooks had 46 yards on his two carries, and Christopher Brooks had three carries for 25 yards before exiting with an injury, though Wilcox anticipates him playing at TCU.

TCU also scored touchdowns on its first two offensive possessions of the season. The Frogs also scored the third time they had the ball, and led 35-0 after TDs on five of their six possessions before halftime.

While Cal has never played the home team in Fort Worth, the Bears are 2-0 at Amon Carter Stadium on the TCU campus. They twice beat Air Force in the Armed Forces Bowl, in 2007 and then again in 2015 when Jared Goff threw six TDs in a 55-36 win.