Texas receiver Devin Duvernay tearing it up from the slot 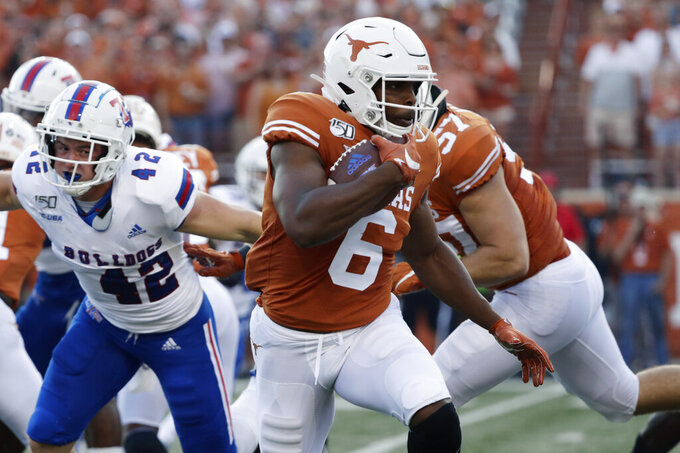 FILE - In this Saturday, Aug. 31, 2019 file photo, Texas wide receiver Devin Duvernay (6) during the first half of an NCAA college football game against Louisiana Tech in Austin, Texas. Texas senior wide receiver Devin Duvernay is having his best year after a position change has made him quarterback Sam Ehlinger’s top target. Duvernay has 45 catches this season and his nine per game is best in the nation heading into No. 11 Texas’ Saturday, Oct. 12, 2019 matchup against No. 6 Oklahoma. (AP Photo/Eric Gay, File)

AUSTIN, Texas (AP) — It seems like ages ago when Texas receiver Devin Duvernay was supposed to be — wanted to be — a Baylor Bear.

He was signed and all but delivered to Baylor in 2016 when the Bears were at the apex of their success in the Big 12. Then the Baylor sexual assault scandal happened, coach Art Briles was fired and the program was turned upside down by investigations. Duvernay opted out of Waco and landed in Austin.

Duvernay doesn't talk much about the decisions that led him to Texas. But 3 ½ seasons and 115 catches later, he has gone from the third option in the passing game to Sam Ehlinger's No. 1 target this season. It has all proven that the senior made all the right moves for both himself and the No. 11 Longhorns (4-1, 2-0 Big 12).

Duvernay leads the nation with nine receptions per game, and his 45 catches this season are six more than Texas' next three receivers combined heading into Saturday's Big 12 showdown with No. 6 Oklahoma (5-0, 2-0) in Dallas.

Long known for his speed and sticky hands, his knack of wiggling into open spaces to convert third downs has been uncanny. And his ability to use his 5-foot-11, 210-pound frame to punish tacklers has been a revelation.

"The anger that he runs with when he has the ball in his hands and his physicality is just so impressive," Texas coach Tom Herman said.

It took some struggles to get to this point.

Duvernay was one of the top recruits in the country coming out of high school and seemed like a perfect fit for the Baylor offense and its deep-strike playmakers at wide receiver. The Baylor scandal erupted with Briles getting fired just before Duvernay and his brother Donovan, a defensive back, were ready to move to campus.

With Baylor in a meltdown, the family wanted out of Waco. Duvernay got a big break when he learned Baylor had never formally filed his signing paperwork with the Big 12. He was effectively declared a free agent and it was Texas that won the new recruiting battle for the player everyone wanted.

Then-coach Charlie Strong lured Duvernay with his new offense, which looked a lot like Baylor's old one.

"I wanted to find somewhere I felt comfortable," Duvernay said this week. "I had a special relationship with that staff (Briles) and those guys. Losing that and not knowing what to do was difficult. Meeting with coach Strong and the staff, I just felt like this is the place I want to be."

As a freshman, he caught 20 passes and three touchdowns that covered 63, 75 and 80 yards. The first one, a play he still considers a special moment, came against Oklahoma. But Strong was fired at season's end. Herman came in and the offense changed — and so did Duvernay's role. He had just nine catches and no touchdowns in 13 games in 2017. Duvernay calls that a "difficult" time.

By 2018, he had 41 catches and four touchdowns. But the Texas coaching staff still saw untapped potential.

On the day Texas reported to training camp in August, the coaches pitched a move from the outside to the inside. He'd be closer to the ball and running routes into the heart of the defense.

The connection with Ehlinger has clicked from the start.

"The transformation for him from outside receiver to slot has been great," Ehlinger said. "This is his last year, so he's taken it as a personal challenge."

Duvernay's breakout came in Texas' 45-38 loss to LSU. He had 12 catches for 154 yards and two TDs. His 44-yard score on a fourth down in the fourth quarter saw him take a short pass and burst through a gap between two defenders before they could close it.

He followed that with another 12-catch game in a win over Oklahoma State. Of his 15 catches on third down, 13 have picked up a first down. He's now on the watch list for the Biletnikoff Award given to college football's top receiver.

Texas will even use Duvernay as a running back. He lined up with Ehlinger in the backfield and took a handoff 13 yards for a touchdown against West Virginia.

"Duv is kind of an all-everything guy for us now," Herman said. "When he gets in the open field, if he gets a crease his acceleration is elite."