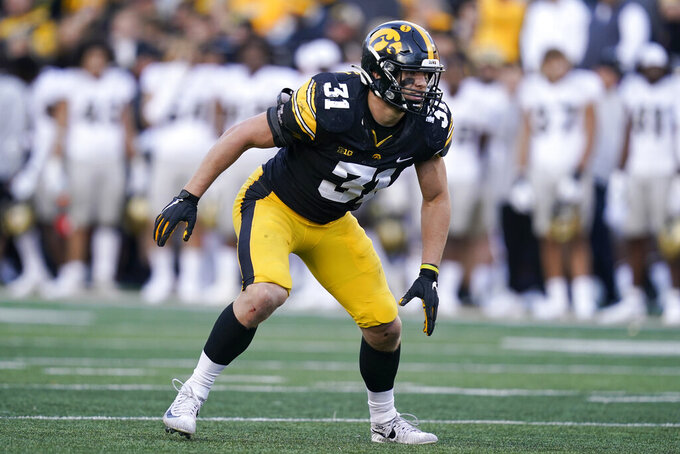 FILE - Iowa linebacker Jack Campbell (31) runs on the field during the second half of an NCAA college football game against Purdue, Saturday, Oct. 16, 2021, in Iowa City, Iowa. Campbell plans to savor his 2023 senior football season after missing spring practice to allow nagging injuries to heal. Campbell was the national leader in tackles with 143 last season and a second-team pick to The Associated Press All-Big Ten team. (AP Photo/Charlie Neibergall, File)

IOWA CITY, Iowa (AP) — Wearing a T-shirt and shorts instead of a uniform and pads, Iowa linebacker Jack Campbell paced the field during the Hawkeyes’ open practice in April.

It’s the way he was dressed the whole spring, when he was held out of practices as he rested and rehabilitated nagging injuries from a season in which he led the nation with 143 tackles.

“It was tough, obviously — every competitor is going to want to be out there,” Campbell said this week. “I wish I could have worked every single day in the spring. But just due to the fact that I was trying to get things healed up and fixed up, that wasn’t an option. For me, personally, you can’t take a day for granted.”

Campbell, a senior, is back on the field for summer workouts, and he’s trying to convey that attitude to teammates.

“When I was a freshman, I didn’t know what to expect,” Campbell said. “I learned really quickly that the summer goes by pretty fast, and then you’re in fall camp.”

An Associated Press All-Big Ten second-team selection last season, Campbell is healthy and expected to once again play a major role for an Iowa defense that ranked as one of the best. The Hawkeyes led the nation with 25 interceptions and ranked third in turnovers forced with 30. They allowed 19.2 points per game.

Campbell was the anchor at middle linebacker.

“If you’re the linebacker at Iowa, you’ve got to know all of the calls,” defensive end John Waggoner said. “He’s on top of that, barking out calls, and seeing things before other people do. He’s a great leader and an example for how the younger guys should act.”

Campbell played as a true freshman and recorded 34 tackles his first two years. He broke out in 2021. His tackle total ranked fifth all-time in Iowa history and was the most by a linebacker since Pat Angerer had 145 in 2009. Campbell had five games with 10 or more stops, including 14 in the season-ending Citrus Bowl loss to Kentucky.

The season took a toll on his body and he needed the spring to recover. He said his off-field work was important for growing his game. Much of his time was spent watching video and rehabbing with athletic trainers.

“I just worked my butt off in the film room and talked to other linebackers about football stuff, just doing all the things off the field I could to make an impact," he said. "But ultimately, I’m here now, and I’m ready to go.”

Campbell said the spring gave him a chance to work on the mental side of the game.

Campbell has always been vocal, and he has been a mentor to younger players in a linebacker room with plenty of depth.

“He’s a beast, he’s relentless,” Waggoner said. “He just goes so hard. And the younger players see that.”

With preseason practices starting in a little over a month, Campbell is healed and excited to savor his senior season.

“As I reevaluated myself for this season, I’m never going to be satisfied with any single play,” Campbell said. “You can always get better at everything, and that’s the mindset I’ve taken this summer, just improving on every facet of the game. I know it’s kind of a generic answer, but that’s what I’m working on — just being the best Jack Campbell I can be.”