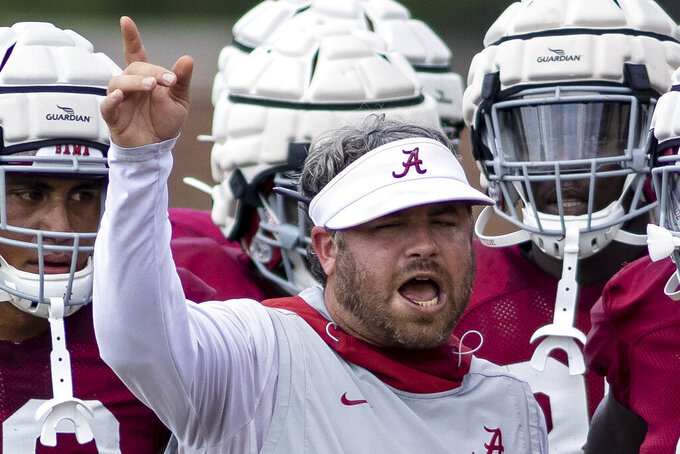 FILE - Alabama defensive coordinator Pete Golding works with players during the NCAA college football team's practice in Tuscaloosa, Ala., Thursday, Aug. 12, 2021. Alabama defensive coordinator Pete Golding has been arrested and charged with a DUI. Golding was listed as an inmate in the Tuscaloosa County Jail on Thursday morning, Feb. 3, 2022, after he was jailed on $500 bond. No further details were immediately available. (AP Photo/Vasha Hunt, File)

TUSCALOOSA, Ala. (AP) — Alabama defensive coordinator Pete Golding has been arrested and charged with a DUI.

Golding was listed as an inmate in the Tuscaloosa County Jail on Thursday morning after he was jailed on $500 bond. No further details were immediately available.

“I am deeply sorry for the actions that led to my arrest last night," Golding said in a statement. "I sincerely apologize to my family, everyone in our organization, including our players, Coach (Nick) Saban, the staff, the University of Alabama, and our fans.

"Regardless of the outcome of this pending investigation, I did not uphold the values I have for myself and the values of the Alabama football program. I am committed to learning and growing from this mistake and I will work to earn back the trust of those who I have disappointed.”

Saban hired Golding in 2018 as co-defensive coordinator with Tosh Lupoi. He was promoted in 2019 and helped the Crimson Tide win the national title the following season and a Southeastern Conference championship in 2021.

The Tide lost to Georgia in the national championship game.

"We are mindful of the seriousness of the situation and will continue to gather more information to address this personnel matter,” a statement attributed to the athletic department said.

Saban discussed Golding's contributions to the team and recruiting abilities on Wednesday in talking about the Crimson Tide's second-ranked recruiting class.

“I think Pete has a great personality. I think he spends a lot of time with players," Saban said. "And I think it’s all about relationships. I know that we have a good product here. Pete does a great job of selling that product.

“But I think in the end, the players know that he cares about them.”