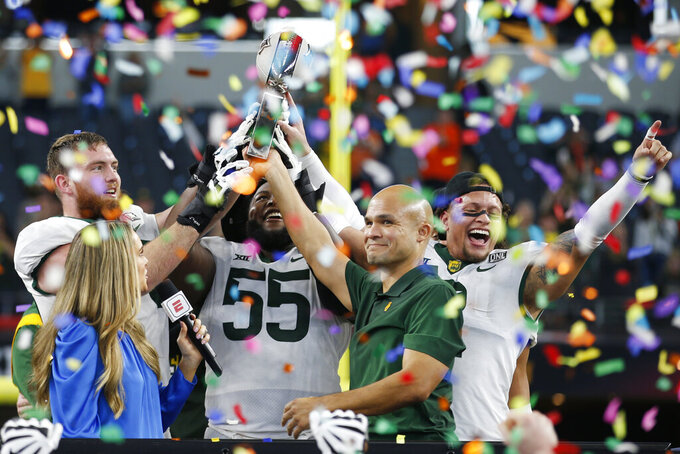 FILE - Baylor offensive linemen Connor Galvin, left, and Xavier Newman-Johnson (55), head coach Dave Aranda, and linebacker Terrel Bernard, right, hold up the trophy as ABC commentator Molly McGrath looks on after an NCAA college football game against Oklahoma State for the Big 12 Conference championship in Arlington, Texas, Saturday, Dec. 4, 2021. Aranda has agreed to a contract extension through the 2028 season after leading the Bears to a Big 12 championship and a school-record 12 wins capped by a Sugar Bowl victory last season. The school announced the extension Tuesday, Feb. 15, 2022, two months after athletic director Mack Rhoades had said there was a verbal agreement in amend the coach's contract. (AP Photo/Tim Heitman, File)

WACO, Texas (AP) — Baylor coach Dave Aranda has agreed to a contract extension through the 2028 season after leading the Bears to a Big 12 championship and a school-record 12 wins capped by a Sugar Bowl victory on New Year's Day and a No. 5 ranking in the final AP Top 25 poll.

The school announced the extension Tuesday, two months after athletic director Mack Rhoades had said there was a verbal agreement to amend the contract of the coach who at that time was being mentioned for several head coach openings. The private school does not disclose specific contract terms.

Aranda is 14-9 in his two seasons at Baylor, where he is a head coach for the first time. The 45-year-old Aranda was coming off an undefeated national championship as LSU's defensive coordinator when he got a six-year contract in January 2020 after Matt Rhule left the Bears to become coach of the NFL's Carolina Panthers.

“My family and I are truly appreciative of the tremendous support we have received from Mack, President (Linda) Livingstone and the entire Waco community,” Aranda said. “I look forward to continuing the work we’ve started on and off the field in the years to come.”

Baylor went 2-7 in Aranda's altered and shortened debut season. He wasn't even able to have spring practices with his new team after taking the job because of the early stages of the COVID-19 pandemic.

The Bears were much improved on defense and had new offensive coordinator Jeff Grimes in 2021. They made it to the Big 12 title game for the second time in three seasons, winning 21-16 after safety Jairon McVea knocked Oklahoma State running back Dezmon Jackson out of bounds just inches short of the end zone pylon on his desperate, fourth-down dive.

Baylor’s only other Big 12 titles came in 2013 and 2014 under coach Art Briles, who was fired in May 2016 after the revelation of a sprawling sexual assault scandal. A lingering NCAA investigation related to that case was finally resolved last August, just before the season.

While there were no players or coaches remaining from Briles’ tenure, Baylor was placed on four years of probation while still able to play in postgame games. Aranda and his staff had to deal with a reduction of 30 official visits and a three-week ban on unofficial visits during recruiting this academic year.

Aranda was named the AP Big 12 coach of the year even before Baylor beat Ole Miss 21-7 in the Sugar Bowl and finished with its highest ranking ever in a season-ending AP Top 25 poll. The Bears' 12-2 record included five wins over ranked teams, a single-season school record.

“Dave has brought unprecedented success to our football program both on and off the field. He has brought tremendous national exposure and acclaim to our institution and the greater Waco community," Rhoades said. "Dave is, without question, one of the most brilliant minds in college football across the country.”

When he left LSU, Aranda was the highest-paid college assistant at $2.5 million a season, and had been a Power Five defensive coordinator for seven seasons. He was at Wisconsin from 2013-15 before spending four years at LSU. He began his college coaching career in the Big 12 as a graduate assistant at Texas Tech from 1999-2001.

Livingstone said Baylor is “extremely pleased” to make a long-term commitment Aranda after one of the most successful seasons in school history.