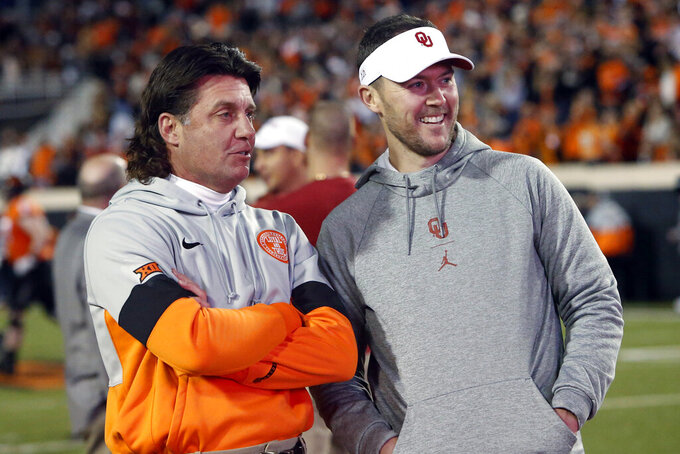 With a month to go before the Big 12 championship game, No. 18 Oklahoma and No. 22 Texas both have paths to another Red River rivalry matchup in December.

There are also plenty of ways to mix things up for a title game that has long ended bathed in crimson and cream, with sprinkles of burnt orange.

Or there could be more of the same Dec. 19 at AT&T Stadium, the home of the NFL's Dallas Cowboys.

If Oklahoma (5-2, 4-2) and Texas (5-2, 4-2) both win the rest of their games, they could meet for the Big 12 championship for second time in three seasons. That would be assured if they finish in a four-way tie with Iowa State and Oklahoma State, or a three-way tie with only the Cowboys. A three-way tie with the Cyclones would trigger another round of tiebreakers that would depend on how other teams finish.

Oklahoma has won eight of the last 10 championship games, including all three since the Big 12 was able to reinstate its title game following a six-season hiatus.

The other two during that 10-game stretch were won by the Longhorns, who won the Big 12's last national title during the 2005 season with Vince Young, and were national runner-ups four years later.

During those six seasons without a title game, five different teams won or shared Big 12 championships. Oklahoma State was the champ in 2011, then Kansas State shared with Oklahoma in 2012. Baylor won the 2013 title and was co-champion in 2014 with TCU before the Sooners won the outright titles in 2015 and 2016, starting their current streak of five consecutive league titles.

Kansas State (4-3, 4-2), which has lost two in a row since winning its first four Big 12 games, plays Saturday at Iowa State.

Since starting 0-2 in the conference for the first time since 1998, two years before their last national championship, the Sooners have a four-game winning streak. That started with a four-overtime win over Texas in mid-October, the last loss by the Longhorns, whose scheduled game Saturday was pushed back to Dec. 12 because of virus issues in the Jayhawks program.

Oklahoma State is the only team with four regular-season games left, starting Saturday with Bedlam on the road against the Sooners. The Cowboys then have games against Texas Tech and TCU before going to Baylor on Dec. 12 to make up a game postponed Oct. 17 after the Bears had positive COVID-19 tests.

West Virginia (5-3, 4-3) has alternated wins and losses all season, but the Mountaineers still could have a chance to get into the Big 12 title game if they win their remaining games against Oklahoma and Iowa State — and then get a lot of help.

Out-of-contention Baylor (1-5, 1-5) could still have an impact on who plays in the title game with an upset or two over its remaining games against Kansas State, Oklahoma and Oklahoma State. The Bears' last three losses are by a combined 18 points.

Some of the potential scenarios to determine the Big 12 title game matchup, though the league is pretty much already out of contention for a spot in the College Football Playoff:

Iowa State vs. Oklahoma State. No tiebreakers would be needed to figure out a matchup of first-timers if the Cyclones and Cowboys both win the rest of their games. That would include Iowa State beating Texas, and Oklahoma State winning Bedlam for only the third time in the last 18 meetings.

WIN OUT AND MISS OUT

Oklahoma can win its last three games (Oklahoma State, West Virginia and Baylor) and miss out on the Big 12 title game. If the Sooners ended up in a four-way tie at 7-2 with Kansas State, Iowa State and Oklahoma State, they would be left out on a tiebreaker because of their back-to-back losses to the Wildcats and Cyclones to start conference play. Same as if Oklahoma, Iowa State and Kansas State finished in a three-way tie.

Iowa State, Kansas State, Oklahoma, Oklahoma State, Texas and West Virginia could all finish with 6-3 conference marks. There are different ways for that to happen, leading to multiple levels of tiebreaker scenarios, including different round-robins. There is even the possibility of a 6-3 team finishing alone atop the standings, with as many as six 5-4 teams vying for a spot in the Big 12 title game.