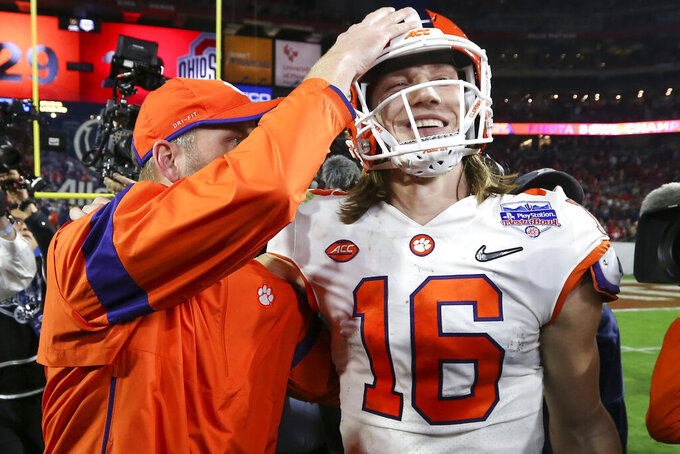 GLENDALE, Ariz. (AP) — Blaring from the Clemson locker room after yet another playoff victory was Aretha Franklin's classic “Respect.”

Sure, Clemson ran roughshod through the Atlantic Coast Conference. But was it too easy?

Facing a serious challenger for the first time in months, No. 3 Clemson and its perfect quarterback had to tap into their championship DNA to advance to the College Football Playoff title game for the fourth time in five years.

Trevor Lawrence connected with Travis Etienne on a 34-yard, go-ahead touchdown with 1:49 left in the fourth quarter, capping a 94-yard march, and the defending national champions beat No. 2 Ohio State 29-23 Saturday night in the Fiesta Bowl.

"We finish,” said Clemson coach Dabo Swinney, whose Tigers are 100-2 when leading going into the fourth quarter since 2011. “That's not just who we are. That's what we do.”

The Tigers (14-0) will play No. 1 LSU on Jan. 13 in New Orleans, looking for their third national title in the last four seasons.

Clemson played only one close game this season, a one-pointer way back in September against North Carolina. Otherwise the Tigers rarely needed to play a starter in the fourth quarter.

"Everybody kept saying we didn’t play nobody, that we blow out teams. Tonight showed what we can do," Clemson receiver Tee Higgins said. “We showed everybody we got fight in us.”

Ohio State (13-1) proved to be every bit Clemson's match, though the Buckeyes walked away frustrated by several close officiating calls. Especially two video reviews that could have gone either way and did not go theirs.

“One play can alter the game,” Ohio State coach Ryan Day said. “It didn't seem like we got any of those plays.”

The Buckeyes had their 19-game winning streak snapped, losing for the first time under Day.

Ohio State jumped out to a 16-0 lead in the first half and then responded to a Clemson rally to retake the lead, 23-21 in the fourth quarter.

The Tigers got the ball down two at their own 6 with 3:07 left in the fourth quarter. Lawrence, after being up and down for much of the night, suddenly found the Golden Boy form that he used to lead Clemson to a national title as a freshman last year.

The Tigers needed four plays and 1:18, with Lawrence completing all three of his passes and mixing in an 11-yard run. The sophomore quarterback who has never lost a college start passed for 259 yards and two scores and ran for a career-high 107 yards, including a 67-yard touchdown late in the first half.

“Just the fight of this team. Didn't play great. Didn't look pretty, but just finding a way to get it done,” Lawrence said.

Lawrence added a 2-point conversion pass to Higgins, but left plenty of time for Ohio State and Justin Fields to respond. The Buckeyes drove to the Clemson 23, but on second-and-7, Fields fired to the end zone and was picked off by Nolan Turner with 37 seconds left. Ohio State receiver Chris Olave had broken off his route thinking Fields was going to scramble.

The pick secured Clemson's 29th straight victory and the Tigers improved to 6-2 in playoff games.

“I told Ryan, that Ohio State team, what an unbelievable game, their quarterback, their back, those guys played their hearts out,” Swinney said. "But in the end, our guys showed what they're made of. They've got the heart of a champion, they've got the eye of a tiger.”

Ohio State went into the fourth quarter trailing 21-16, and with everything seemingly going Clemson's way. Buckeyes star J.K. Dobbins ran for 174 yards, including two 60-plus yarders in the first half, but was slowed by a twisted left ankle late in the second quarter.

Fields heated up and orchestrated an 84-yard drive, capped by a fourth-and-short, 23-yard touchdown pass to Olave to give make it 23-21 with 11:46 left in the fourth.

Fields, who went to high school 20 miles from Lawrence in the northwest suburbs of Atlanta, passed for 320 yards and a touchdown. But he was picked off twice after throwing just one interception in the regular season.

It was the first matchup between the two former five-star recruit quarterbacks from the class of 2018. They were far from perfect, but both delivered in crunch time. If this is the start of a long rivalry, bring it on.

Clemson: The Tigers were in danger of being blown out in the first half, but they managed to come up with three red-zone stops, where Ohio State settled for fields goals. Then they scored two touchdowns in the final three minutes of the half to make it a new game.

“I told them at the half I think we took their best punch," Swinney said.

Ohio State: The calls that folks in Columbus will be talking about for a long time:

— A targeting foul on defensive back Shaun Wade in the second quarter kept Clemson's first touchdown drive alive when the Buckeyes were up 16-0.

— A roughing the punter call against the Buckeyes did the same in the the third quarter and led to Clemson taking its first lead.

— It looked as if Ohio State regained the lead in the third quarter when All-American Jeff Okudah stripped Clemson's Justyn Ross and Jordan Fuller scooped and scored. A video review ruled Ross had not completed the catch and turned a touchdown into an incomplete pass.

Fuller said he had a feeling the fumble was going to be overturned.

“Yeah, just because of the way the game was going,” he said.

Clemson: The Tigers face LSU for the first time since the 2012 Chick-fil-A Bowl. Clemson won that meeting 25-24.

Ohio State: Fields and the Buckeyes start next season against Bowling Green.