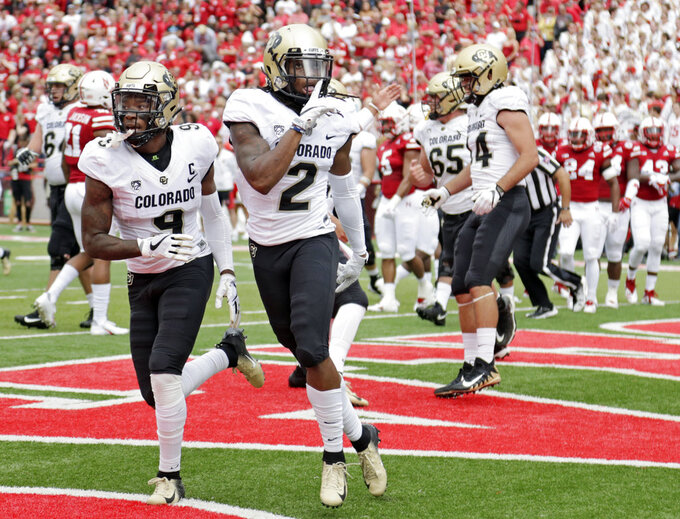 FILE - In this Sept. 8, 2018, file photo, Colorado wide receiver Laviska Shenault Jr. (2) gestures after he scored a touchdown against Nebraska during the first half of an NCAA college football game in Lincoln, Neb. Shenault is the nation’s leading receiver and plays for an undefeated Power Five team, yet he remains something of an afterthought in a Heisman conversation that has been dominated by quarterbacks such as Alabama’s Tua Tagovailoa and Ohio State’s Dwayne Haskins thus far. Part of the problem is that Colorado has played a relatively soft schedule, due to Nebraska and UCLA having down seasons. (AP Photo/Nati Harnik, File)

BOULDER, Colo. (AP) — Away from the field, he's just Laviska Shenault Jr. — a mild-mannered, soft-spoken person who doesn't like the spotlight.

Once he steps onto it, the Colorado sophomore receiver transforms into an alter ego he's nicknamed "Viska 2Live" — a play-making wizard who's vaulted into the conversation for the Heisman Trophy.

That humbleness and being the best he can be is his way of honoring his father , who died while getting out of the car to change drivers in 2009 while the family was returning home from a pool party. Shenault Jr. was only 10 at the time and a passenger in the vehicle.

Ever since, he's grown out his dreadlock hair as a tribute to his dad . After touchdowns, he points toward the sky — for dad.

His moves are straight out of a Madden video game.

Then again, he and his father, Laviska Shenault Sr., spent hours playing the football video game, uncovering formations they liked and then heading into the backyard or the street to rehearse them.

No wonder the 6-foot-2, 220-pound wideout from DeSoto, Texas, is so dynamic from multiple positions on the field. As a receiver, he's caught 60 passes for 780 yards and six TDs. His 130 yards receiving per game lead the nation . As a tailback in the wildcat formation, he's scored five times, including a 49-yard scamper last weekend at Southern California during a 31-20 loss.

"This is kind of a crazy comparison, but he reminds me of LeBron (James)," said quarterback Steven Montez, whose team is 5-1 heading into a showdown at No. 15 Washington on Saturday with Shenault's availability uncertain due to a recent toe injury. "You think, 'All right, he has already played this well up to now, maybe he'll have a slower game?' He is doing more crazy stuff and keeps getting better every week. That's the scariest thing about him because you think, 'What is he going to do this week?'"

Hard to tell for a receiver who also fancies himself a basketball player. He didn't play throughout high school, though, because he was asked to cut his hair.

He couldn't. It has too much meaning. He keeps it long for his father, who never had him cut his hair.

"Laviska dedicates a lot to his dad," said his mom, Annie Brown Shenault . "From basketball to football, they did it all together. His dad was such an influential supporter."

On the day of the accident, the family was returning from a barbecue at a swimming pool when they pulled over to switch drivers. Shenault Sr. was on his way to the driver's side, when he slipped and stumbled into the street and was hit by another vehicle. All five of their kids were in the car at the time.

The accident remains difficult for Shenault to talk about.

"There's a lot he's holding inside," Brown Shenault said. "It pushes him, because his dad always told him, 'Stay out of trouble and do your best.' It's more like a motivation, 'Dad, I'm doing what I'm supposed to do.' Whatever he starts, he puts his heart into it. He always has."

Like learning to ride a bike without training wheels at 3. Or winning Monopoly on family game nights. Or bursting on the scene in a big way this season with 388 yards receiving over his opening two games.

"He's always been overachieving," his mom said. "We brought him up do it right the first time so you don't have to do it again. Every time you go out there, whether it's on the field, in the classroom, or whatever you're doing, give it your all. He's a go-getter, keeps going and going like that Energizer (bunny). He just keeps going and going."

One of Shenault's good friends on the Buffaloes is fellow wideout K.D. Nixon, who's also from DeSoto. They've been going to school together since middle school and are tight.

Really, though, all of the receivers have developed a bond. They've organized offseason workouts with Montez to enhance their rapport.

"He's a huge weapon and we use him a lot of different ways," said Montez, who's connected with Shenault for six plays of 30 or more yards this season, including an 89-yard scoring strike against Colorado State. "That's very intimidating for a defense because I'm sure they are thinking, 'How are we going to stop this guy? How are we going to try to contain him this game?' I really don't think you can."

About Shenault's alter ego, "Viska 2Live" — his Twitter handle — he developed the persona to help him flip the switch into game mode.

"It's for my teammates, my mom, for everybody that helps me out," said Shenault, whose brother, La'Vontae, is a highly touted high school receiver verbally committed to Texas Tech. "Because when I get on the field, I'm going to do something that's going to get everybody's attention."

His play is certainly generating some Heisman buzz, even if he doesn't pay any notice.

"I'm not worried about none of that," Shenault said. "Nothing to say. A lot to prove."