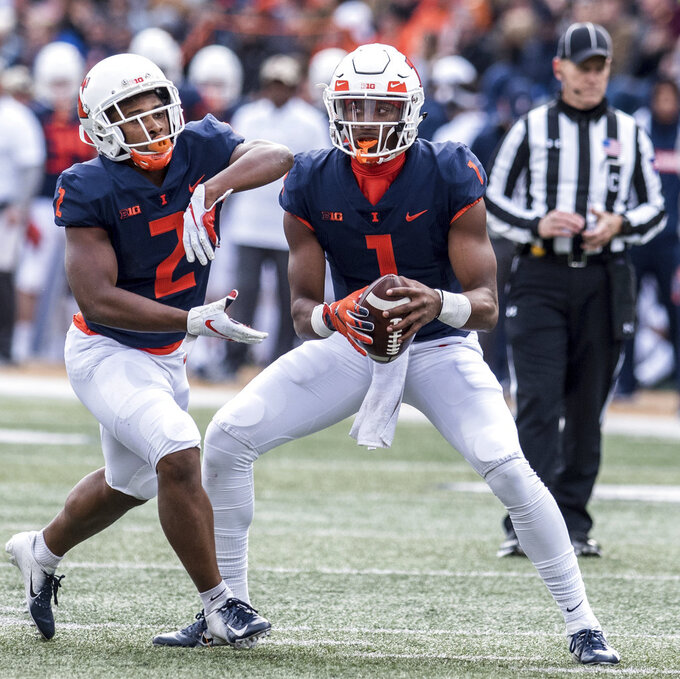 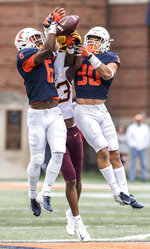 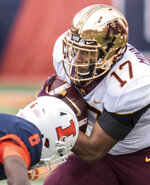 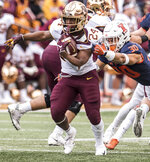 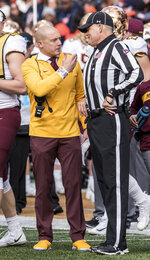 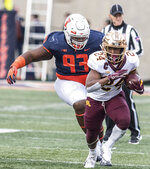 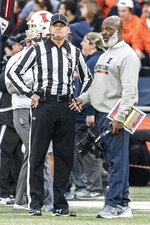 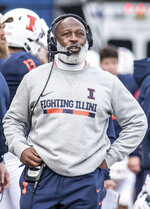 CHAMPAIGN, Ill. (AP) — The hot seat Illinois coach Lovie Smith has found himself on lately cooled down a bit on Saturday as Illinois beat Minnesota 55-31 in a game that saw some impressive and long scoring runs.

Meanwhile, things are heating up for Minnesota coach P.J. Fleck, who has watched his team drop five of its last six games.

Reggie Corbin rushed for 213 yards and two touchdowns — both coming on runs of more than 70 yards — to become the first Illini player to rush for two 70-yard-plus touchdowns in a single game since 1944.

"Reggie plays like that every game," Smith said. "Week in and week out, he just plays football for us."

It was Corbin's fourth 100-yard rushing game in the last five games.

Minnesota (4-5, 1-5 Big Ten) had trouble all game stopping the run, giving up 430 yards and five touchdowns on the ground. Illinois racked up 646 total yards of offense.

"It's a lack of consistency that's hurting us," Fleck said. "And it's all over the field, on offense, defense, special teams. This was just not a good football game for us. And that's on me."

"We didn't tackle anyone," Fleck said. "I think our speed got exposed on defense. They were running away from us."

Illinois quarterback AJ Bush managed the game well and accounted for four Illinois touchdowns, going 18 of 25 for 216 yards passing with two touchdowns and one interception. Bush rushed for 127 yards on 14 carries and two more touchdowns.

"AJ played well, both running and passing," Smith said. "He's shown us what kind of a leader he is."

Redshirt freshman Tanner Morgan got the start again at quarterback for Minnesota after an excellent performance in beating Indiana last week in his first career start. True freshman Zack Annexstad won the job in fall camp, hurt his ankle in the third game, played through it rather ineffectively and then suffered an unspecified midsection injury in a loss at Nebraska on Oct. 20.

Morgan had the first 300-yard passing game last week for the Gophers since 2015 and may have secured the starting role even if Annexstad gets healthy.

Morgan was 14 of 27 for 258 yards and two touchdowns against Illinois.

Sandwiched between the Illini scoring runs to open the game was a 12-play Minnesota drive that resulted in a 4-yard touchdown run by Mohamed Ibrahim.

Illinois' first two possessions resulted in two 72-yard touchdown runs — one by Corbin and the other by Dre Brown. Both came on second-and-long and both backs were untouched once they cleared the line of scrimmage. Corbin later ripped off a 77-yard scoring run.

Brown rushed for 92 yards and one touchdown. He was playing in lieu of injured starting running back Mike Epstein, who generally shares carries with Corbin.

Trailing 31-17 midway through the third quarter, the Gophers were starting to click offensively and were driving when running back Seth Green fumbled on the Illinois 30-yard line.

On the next play, Bush lofted a pass to Daniel Barker for an easy score and a 38-17 lead.

Minnesota: Needs six wins to nail down a bowl bid, and Saturday's defeat makes it all the more difficult. With three games left, against Nebraska, Iowa and Wisconsin, they need wins in two of them. Not impossible, but not easy.

Illinois: Calling the defense after the abrupt resignation last week of coordinator Hardy Nickerson, Smith acquitted himself well, with his defense giving up 438 yards, substantially less than in past weeks.

"We needed to come back and show we can play defense," Smith said. "I think we're getting closer."

Illinois: Travels to Nebraska next week.