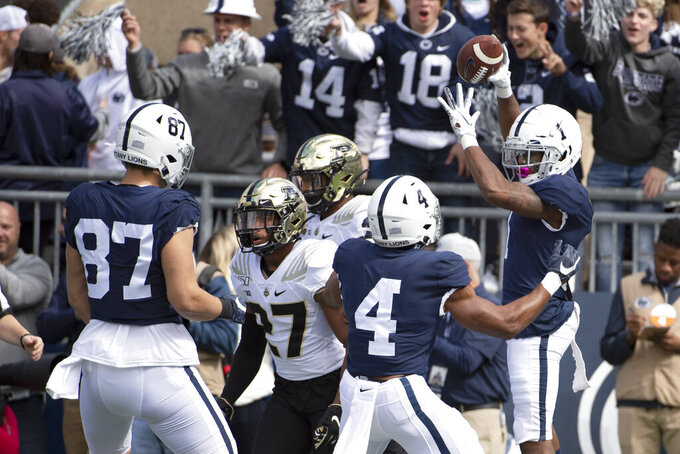 STATE COLLEGE, Pa. (AP) — Purdue quarterback Jack Plummer took another hard sack then dragged himself to his feet. He tried to shake the pain out of his right arm before taking a slow walk to his team's locker room.

The first half was mercifully over. No. 12 Penn State cruised to a 35-7 rout of the Boilermakers, but the punishment continued in the second.

The Nittany Lions (5-0, 2-0 Big Ten) rolled behind 10 sacks, one shy of the program's single-game record. They held the Boilermakers (1-4, 0-2) to 104 total yards — including minus-19 rushing. A week after shutting out Maryland, the Nittany Lions were dominant again.

Sean Clifford threw for 264 yards with three touchdowns and ran for another score for Penn State. The offense scored on its first four drives and that was enough.

Yetur Gross-Matos and Shaka Toney combined for five sacks and six other Nittany Lions defenders had a hand in at least one.

"Going into the year, we knew that we had a lot of guys that were good," linebacker Micah Parsons said. "The way that we're clicking right now and everyone's vibing and playing off each other, it's really special."

Penn State jumped out fast with four scoring drives lasting no more than 3:41.

KJ Hamler beat single coverage for a 23-yard touchdown catch to open the scoring and Clifford added a 3-yard touchdown run to cap Penn State's second possession. The Nittany Lions turned a three-and-out by Purdue into an easy score immediately after when Jahan Dotson caught a pass over the middle and raced 72 yards, getting a good block from Hamler on the way to the end zone.

Penn State finished another quick drive with a 7-yard pass from Clifford to tight end Pat Freiermuth early in the second quarter. Noah Cain finished with 105 yards on 12 carries and added a 2-yard rushing touchdown in the fourth.

Plummer finished with 119 yards on 13-for-27 passing. He was sacked on two of Purdue's final three plays of the first half. He was replaced in the fourth quarter with Aidan O'Connell.

"We got handled early," Purdue coach Jeff Brohm said. "It was good to see us improve as the game went on."

The Boilermakers were missing more than Sindelar and Moore in this game and they'll likely be adding more names to the injury report that included eight names earlier this week.

Linebacker Cornell Jones left the game in the first quarter with a leg injury, though was able to return. Meanwhile, defensive tackle Anthony Watts suffered a right arm injury and did not return.

To make matters worse, cornerback Cam Allen was ejected for targeting in the first quarter.

Purdue: The Boilermakers were overmatched early but settled down and held Penn State's offense off for much of the second half. Getting Moore back at some point should help, but he's not going to help a defense that entered the day allowing 451 yards and 33 points per game.

Penn State: The Nittany Lions built a big lead off explosive plays and were able to play the second half close to the vest. They opted to chew clock rather than air it out, mindful that a much tougher tests awaits in Iowa City next week.