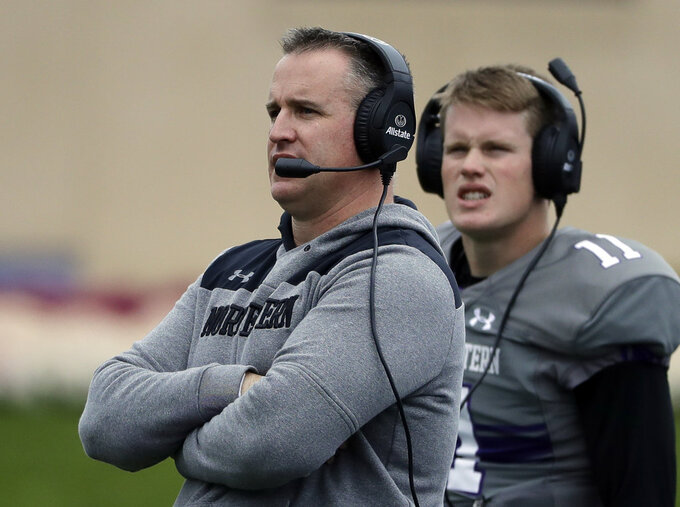 FILE - In this Oct. 27, 2018, file photo, Northwestern head coach Pat Fitzgerald, left, watches his team during the second half of an NCAA college football game against Wisconsin in Evanston, Ill. The program’s winningest coach by a wide margin, Fitzgerald has No. 21 Northwestern playing in the Big Ten championship game for the first time. (AP Photo/Nam Y. Huh, File)

EVANSTON, Ill. (AP) — Safety Jared McGee recalled how little he knew about Northwestern early in the recruiting process and the impression coach Pat Fitzgerald made during a campus visit.

It's safe to say the coach played a major role in luring McGee to Evanston.

"I was like yeah, Northwestern, what conference is that in?" said McGee, a senior from the Dallas area. "And then I showed up to Fitz's house on my official visit and it was like he had been watching me since I was playing Pee Wee. That definitely held true in my time here. I couldn't have asked for a better coach in my college career."

The program's winningest coach by a wide margin, Fitzgerald has No. 21 Northwestern playing in the Big Ten championship game for the first time. The Wildcats (8-4, 8-1 Big Ten) face No. 6 Ohio State (11-1, 8-1) ) in Indianapolis on Saturday. If they pull off the upset, they will clinch their first Rose Bowl appearance since their coach was a star linebacker on the 1995 team.

Back then, the Wildcats captured the nation's imagination with a stunning turnaround after 23 losing seasons. This time, they simply found their footing after stumbling in the early going and won the Big Ten West.

With quarterback Clayton Thorson still limited after surgery to repair a torn anterior cruciate ligament in his right knee, Northwestern dropped three in a row following a season-opening win at Purdue. Top running back Jeremy Larkin had to retire because of a spinal issue following the third game. Northwestern went 0-3 in nonconference play, with a loss to Akron at home. Despite all that, look at the Wildcats now.

They are rolling, with seven wins in their past eight games. And Cameron Green insisted Fitzgerald is a big reason why.

"He pushes us to be the best that we can, whether it's working out, it's conditioning, practicing," said Green, who plays the hybrid "superback" position. "He always knows we can be one step better, and he believes in us, which is very key to everything. Never really puts doubt on us or puts us down in any circumstance or situation, and he picks us up more than anything to give us more confidence. I think that, honestly, is one of the best things you can have as a person."

The lone loss in the past eight games was by 10 to No. 3 Notre Dame, a likely playoff team. They have also won nine straight away from home and own a 15-1 record in their past 16 Big Ten games.

Fitzgerald earned some recognition this week when the conference's coaches and media selected him Big Ten Coach of the Year. But the Wildcats have a chance to grab a bigger prize.

"The brotherhood of this team is the hallmark of what's been the glue that's kept us together through the adversity," Fitzgerald said.

But in many ways, Fitzgerald is responsible.

The Chicago-area product was Northwestern's linebackers coach and recruiting coordinator when, at age 31, he took over in July 2006 following the unexpected death of Randy Walker. In the 13 seasons since, Fitzgerald has a 95-69 record and nearly twice as many victories as the next guy on the school's all-time list — Pappy Waldorf with 49 from 1935-46. Among active Big Ten coaches, he is second in tenure only to Iowa's Kirk Ferentz (20 years).

As a player, assistant and head coach, he has been a part of 13 of Northwestern's 15 bowl games. Wins against top 10 teams have been scarce, with seven straight losses since a victory at No. 9 Nebraska in 2011. The Wildcats' only other top 10 win under Fitzgerald was against eighth-ranked Iowa in 2009. They haven't beaten a team sixth or higher since knocking off No. 6 Michigan in 1996 — their coach's final season as a college player.

Northwestern generally doesn't get the most prized recruits. But the Wildcats have consistently fielded a winner the past two-and-a-half decades, particularly under Fitzgerald, who got a new contract through 2026 prior to last season.

"Week in and week out, he's always given us a great game plan and great motivation — but also being experienced in what we're going through right now," defensive end Joe Gaziano said. "He was a Big Ten champion. He went to a Rose Bowl. And those are two goals that we have this year, that are right in front of us."