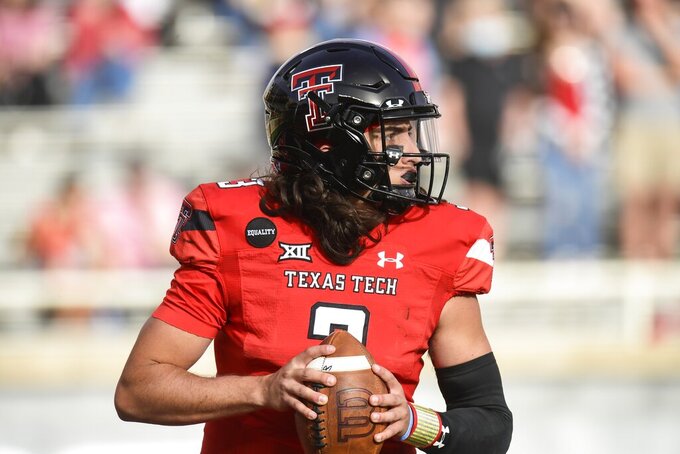 Garibay kicked a 25-yard field goal on the final play of the game, after a final drive when Bowman had two 30-yard completions, and the Red Raiders beat Baylor 24-23 on Saturday.

It was the fourth field goal for Garibay in his first game as starting kicker for the Red Raiders (3-5, 2-5 Big 12). The junior transfer from Riverside City College also made kicks of 48, 28 and 46 yards after replacing struggling Trey Wolff, who is 1-of-5 on field goals.

Tahj Brooks to TD runs for Texas Tech and Bowman, replaced as the starter three games ago, led the Red Raiders on three consecutive scoring drives in the fourth quarter.

Red Raiders coach Matt Wells said the plan was to use both Henry Colombi and Bowman, whose only pass in the first half was intercepted and returned for a touchdown. Colombi never came back in the game after banging his elbow for the second time early in the third quarter, though Wells said he could have played more.

“We didn’t have a set plan. We were just going to play the hot hand,” Wells said. “Honestly, neither one of them were real consistent in the first half. Alan had a heck of a fourth quarter.”

Jalen Pitre returned an interception for a touchdown for the second week in a row for Baylor (1-5, 1-5), which lost its fifth game in a row since winning head coach Dave Aranda's debut in September.

“The locker room’s hard. We’ve been through a fair amount of adversity, and we added some more to our plate tonight,” Aranda said. “This was a game I thought we played well enough to win, disappointed that we didn’t finish with a win.”

Pitre's 26-yard return put the Bears up 7-3 at the end of the first quarter, and they led until Garibay’s final kick.

Baylor quarterback Charlie Brewer, who was 17-of-26 passing for 153 yards, had an 8-yard TD keeper early in the third quarter to put the Bears up 20-6. Their only other score was John Mayers’ third field goal later in the third quarter, a 23-yarder after Brewer was stopped just short of the end zone when Colin Schooler knocked a tight end out of the way to make the TD-saving play.

“That's a four-point tackle, a huge play in the game,” Wells said.

“Well, it’s on the goal line, so a lot of rules and techniques go out the window,” said Schooler, who had 10 solo tackles. "It’s stop them by all means."

Texas Tech started the final drive after a punt at its 14 with 2:14 left. Running back SaRodorick Thompson turned a short pass into one of the 30-yard plays, then on third-and-8 in the final minute had a 15-yard run to the 7, where he slid down even though he appeared to have a shot at a touchdown. Wells said Tech didn't want to leave any time for Baylor.

Baylor hasn’t won in Lubbock in three decades. The Bears have lost 10 in a row there since 1990, including all eight visits since the start of the Big 12 in 1996. The series was played at a neutral site for 10 years in a row until last season.

Garibay was surprised when his mother and siblings made the 16-hour drive from California to be at the game. He hadn't seen them since last Christmas. Then he made all four field goals and averaged 49 yards on five punts on a day with sustained winds near 30 mph, and gusts up to 40 mph.

Baylor: After losing Big 12 leading tackler Terrel Bernard to a shoulder injury, Abram Smith replaced him as the starting linebacker and had a team-high 13 tackles.

Texas Tech: The Red Raiders still have a chance to avoid their fifth consecutive losing season. They have to win their last two games, and then would have to win a bowl game if they make one. They can’t avoid a losing record in Big 12 play for the 11th season in a row.