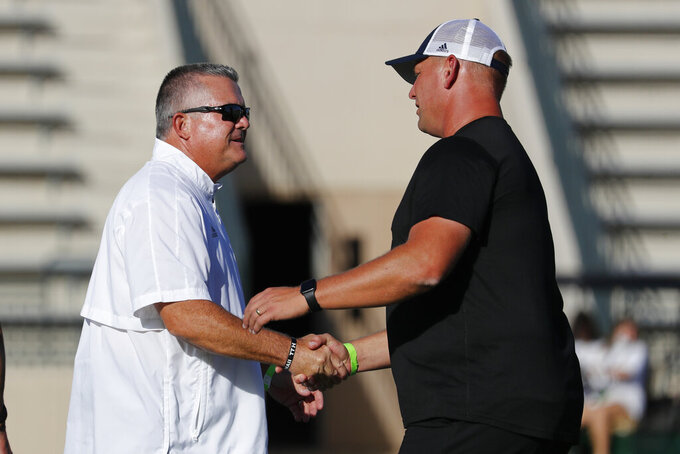 Fresno State (4-2, 1-1) racked up 505 yards of total offense, including 388 passing from Jake Haener, who entered the game as the FBS leader in passing yards. He finished 28-of-50 passing but was intercepted four times — three times inside Hawaii’s 10-yard line.

The last stalled a 13-play drive on first and 10 from the 11-yard line. Haener's pass bounced off receiver Ty Jones' hands right to Nelson, who fell to the ground with the ball to preserve the win.

Hawaii ran out the clock with a trio of QB sneaks by running back Calvin Turner Jr. He fumbled the last one, but Hawaii recovered at its 2-yard line as the clock expired.

Hawaii won without its starting quarterback, Chevan Cordeiro, who was listed as the expected starter on the team’s pre-game depth chart but did not play. Instead, freshman Brayden Schager made his first career start and helped the Rainbow Warriors notch their first win at home over Fresno State since 2007.

“We had a chance to put them away and we didn’t do that and they’re still a good football team, especially here at home and those little things that we missed on in the past couple games that we got past, bit us in the butt today,” Fresno State coach Kaleb DeBoer said.

Fresno State: The loss dropped the Bulldogs into a tie with Hawaii for third place in the West standings of the Mountain West and could knock them out of the AP Top 25.

Hawaii: The victory is the biggest to date for the Rainbow Warriors, who have won back-to-back games for the first time this season.

HAENER HUNG IN THERE

Through Fresno State’s first five games, Haener compiled a completion percentage of 73.1, which ranked seventh nationally. However, he struggled out out of the gates Saturday and completed just four of his first nine passes.

By halftime, Haener was 15 of 26 for 227 yards with two touchdowns and two interceptions, but he went down with 6:31 left in the third quarter after Hawaii’s Quentin Frazier rolled into his legs. A penalty for roughing the passer was assessed, but Haener required assistance leaving the field, prompting freshman Jaylen Henderson into action.

Haener, however, was back out with the offense to start the next drive and missed just three offensive plays.

DeBoer offered an optimistic prognosis after the game.

“He’s got a lower leg injury," he said. "And he got it looked at and came back, obviously, and extended some plays for us, so I’m sure it’s going to be a little sore tomorrow, (but) we got a bye week so it’ll be fine. He looked fine there at the end.”

Haener recorded his fourth straight 300-yard passing game and the ninth in his 12-game career with the Bulldogs since he transferred from Washington.

Fresno State: Has a bye next week before visiting undefeated Wyoming on Oct. 16.

Hawaii: Also has a bye week after playing six games in six weeks before it visits Nevada on Oct. 16.