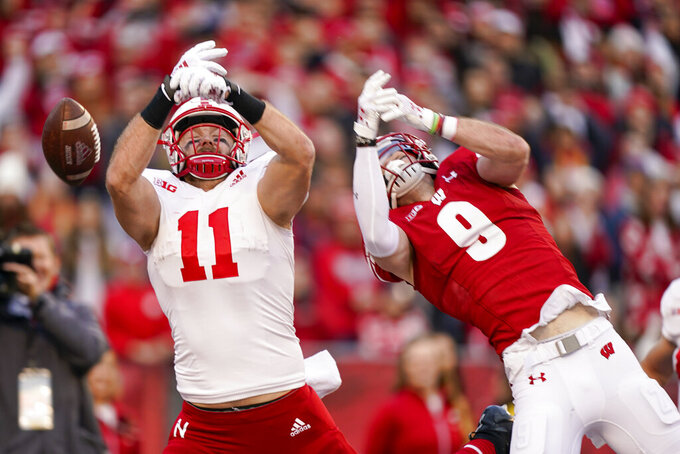 LINCOLN, Neb. (AP) — Nebraska is looking for a happy ending to a disappointing season. And nothing would make the Cornhuskers happier than beating No. 17 Iowa on Friday to end a six-game losing streak in the border battle.

The Huskers (3-8, 1-7 Big Ten) might as well consider this their bowl. It's their last game; they'll be home for the holidays a fifth straight year.

Iowa (9-2, 6-2) has more at stake. A win keeps the Hawkeyes alive one more day in the Big Ten West race. A loss means No. 18 Wisconsin wins the division regardless of the outcome of its game Saturday at Minnesota.

“We control half of the equation," Iowa tight end Sam LaPorta said. "We have to win on Friday and then kind of kick back and watch Minnesota-Wisconsin.”

There's no reason for Iowa to think this one will be easy. The Huskers' eight losses are by a total of 49 points, and seven of them have come in one-score games. The other loss, to Ohio State, was by nine points.

“It seems like each and every year they’ve got guys that are hard to defend and hard to block,” Iowa coach Kirk Ferentz said. “For whatever reason they've played so many close games. It’s tough. We’ve been there. There’s nothing fun about those.”

The Huskers will be without fourth-year starting quarterback Adrian Martinez, who injured his shoulder last week against Wisconsin. Redshirt freshman Logan Smothers will make his first start.

“He’s really sharp,” Nebraska coach Scott Frost said. “He’s not the fresh-faced kid that’s going to get surprised by a bunch of things or pressures or different looks. He is really smart and knows our offense and can operate it. We are going to give him the ball and let him do it.”

The teams have been playing for the Heroes Trophy since the Huskers joined the Big Ten in 2011. Iowa has won seven of the last 10 meetings.

Tension has ramped up the last two years. In 2019, Keith Duncan blew kisses toward the Nebraska sideline after he made the game-winning field goal with one second left. Last year, Frost complained in his postgame news conference about clapping coming from the Iowa sideline messing up his team's snap count, leaving Ferentz clearly annoyed when told about it.

Nebraska will be playing on the day after Thanksgiving for a 32nd straight year. The Huskers are playing Iowa for an 11th year in a row on Black Friday. Before that they played Colorado 15 times and Oklahoma six times.

“It’s one of my goals,” Goodson said. "It’s been one of my goals since I stepped on campus. To be honest, it’s been my goal since high school. But I’m not going to the game thinking I need a thousand yards. I’m focusing on what I need to do to help us win.”

The Huskers are playing a third straight ranked opponent in the regular season for the first time since 1968. Nebraska has lost 17 in a row against Top 25 opponents, the last 12 under Frost.

Tight end Austin Allen announced this will be his final game with Nebraska. He could have used the extra year of eligibility allowed by the NCAA because of the pandemic and returned for a sixth year.

Allen has 547 receiving yards and needs 14 to break Nebraska's tight end season record of 560 set by Junior Miller in 1978.