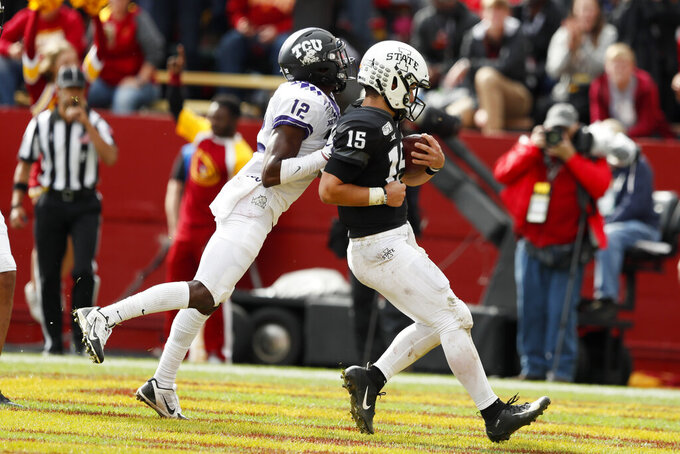 AMES, Iowa (AP) — Iowa State has been searching for a primary ball carrier all season.

The Cyclones might have found their guy in quarterback Brock Purdy.

Purdy gave Iowa State (3-2, 1-1 Big 12) the boost it was looking for in its ground game last week against TCU. Purdy ran for a season-high 102 yards and two touchdowns in leading Iowa State past the Horned Frogs, 49-24.

Purdy, who is ranked fifth in the country in total yards per game in part because of his rushing ability, will look to build on a strong sophomore season when the Cyclones travel to face West Virginia (3-2, 1-1) on Saturday.

Purdy's feet were a big reason why he ascended to the starting job in 2018.

Purdy ran the ball 100 times last season for 308 yards and five touchdowns to supplement star running back David Montgomery. Purdy's scrambles helped compensate for a line that struggled at times to open up conventional running lanes between the tackles.

But it's Purdy's arm that makes Iowa State's offense go, and he played it safe in the opener against Northern Iowa with just two carries. That conservative approach nearly led to disaster, as the Cyclones needed three overtimes — and a fumble recovery by an eagle-eyed Purdy just outside the end zone — to survive, 29-26.

Purdy has since become a focal point of Iowa State's ground game. Purdy leads the Cyclones with 203 yards rushing on 4.5 yards per carry, and he's already matched his 2018 total with five TDs on the ground through five games.

Still, the one area where the diminutive Purdy could improve on is sliding when he's about to get hit.

Purdy rarely does it, even though he's gone as far as to watch film on how Kyler Murray, last year's Heisman winner, successfully avoided contact.

"(Passing game coordinator Joel) Gordon and all of the (coaches) say 'Get down as much as you can,'" he said. "But in the moment, it sort of hard because I want to get all the extra yards that I can. I'll get better at it."

Purdy's ability to tuck and run it has undoubtedly helped his passing game as well. Purdy is also fifth nationally in passing yards per game (315.6) with a 70.8 completion percentage as teams often keep one defender home to spy on Purdy.

"He just gives us another option in terms of making teams defend the entire field," coach Matt Campbell said. It "allows us to take advantage of some mismatches."

Ideally, Iowa State would like to use Purdy to complement its ground attack rather than spearhead it, which potentially exposes him the program's most valuable player to a hit that could end his season. But to do that, the Cyclones would need at least one of their running backs to emerge as a reliable option.

Johnnie Lang moved closer to becoming that guy against the Horned Frogs. Lang, a sophomore who all but disappeared from the game plan after a strong opener, posted career highs of 16 carries for 72 yards in the win over TCU.

"We're getting a lot close there," Campbell said. "I though Johnnie had a great game last week, where he got the tough yards in some critical moments."