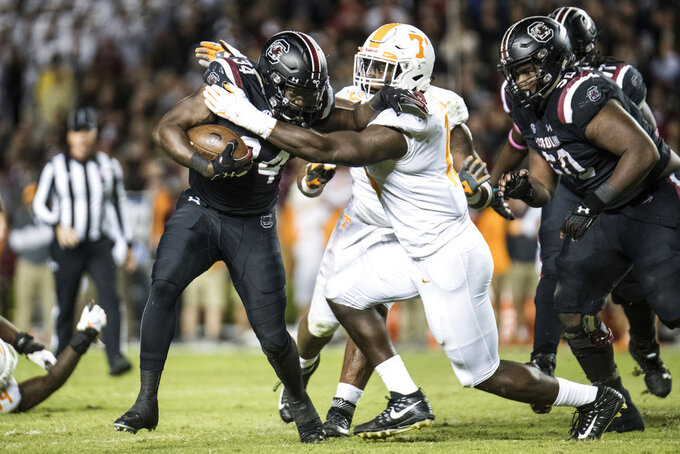 Tennessee (3-5) has yielded 200-plus yards rushing in four of its last five games and is allowing 4.8 yards per carry heading into its matchup with Charlotte (4-4) on Saturday. Mississippi is the only Southeastern Conference team yielding more yards per rush .

Improving that run defense is critical to Tennessee's hopes of earning a bowl bid. The Vols must win three of their last four games to become bowl eligible .

"We've just got to focus on our gaps and just build a wall," linebacker Daniel Bituli said.

Tennessee's vulnerability to rushing attacks became particularly apparent last week in a 27-24 loss at South Carolina as the Gamecocks rushed for 224 yards on 40 carries. South Carolina had averaged 110.7 yards rushing and 3.3 yards per carry in the three games leading up that one.

"They really just took it to us, and we really didn't have an answer for them," defensive end Kyle Phillips said.

This problem isn't anything new for Tennessee.

Tennessee ranked 125th out of 129 Football Bowl Subdivision programs in run defense last season , when it allowed the most yards rushing per game (251.3) and yards per carry (5.4) of any SEC team.

The Vols haven't finished a season ranked in the top half of the SEC in run defense since 2008, the last year of Phillip Fulmer's coaching tenure. Three coaches have come and gone since then.

Tennessee finished eighth out of 12 SEC teams in run defense during Lane Kiffin's lone season on the job. It never ranked higher than eighth in any of Derek Dooley's three seasons, even as the SEC expanded to 14 teams in 2012. Tennessee never got above ninth in run defense during Butch Jones' five-year tenure and hit bottom last season.

The Vols have been counting on first-year coach and former Alabama defensive coordinator Jeremy Pruitt to change that. Alabama led all FBS teams in scoring defense and total defense last year during its national title run .

But he's not working with nearly as much talent at Tennessee as his players to adjust to a new scheme. Tennessee has allowed 169.8 yards rushing per game to rank 11th in the SEC .

Tennessee has a senior-laden defensive line, but it lacks depth at linebacker and has plenty of youth in the secondary, particularly with an ankle injury sidelining senior safety Micah Abernathy for the last three games.

The Vols allowed just 126 yards on 34 carries in a 30-24 victory over Auburn that marks their lone SEC victory. In its four SEC losses, Tennessee has allowed 223.5 yards rushing per game and 5.4 yards per carry.

Tennessee remains confident it can fix its run defense.

"I think if we just focus on what we need to focus on and play our keys the right way, I feel like we can stop anybody," defensive end Alexis Johnson said.

Tennessee goes outside SEC competition this week to face Charlotte, a Conference USA program that has averaged just 3.35 yards per carry as a team . But the 49ers have a quality running back in Benny LeMay, who has run for 745 yards while gaining 5.3 yards per carry.

Charlotte coach Brad Lambert praised the physical nature of Tennessee's defense and said his 49ers will have their hands full attempting to establish the run.

"It's a huge challenge for our offensive line to block the guys on their front seven," Lambert said. "They're just a big, physical group. That will be the biggest challenge. (Tennessee's) problem's been their schedule. You look at the last five or six games, that's a pretty good gauntlet to run."