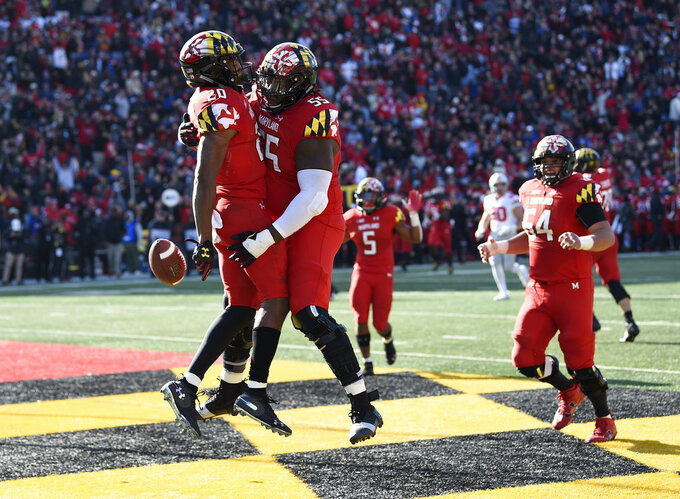 FILE - In this Saturday, Nov. 17, 2018, file photo, Maryland running back Javon Leake (20) celebrates his touchdown with offensive linemen Derwin Gray (55) and Spencer Anderson (54) during the first half of an NCAA football game against Ohio State in College Park, Md. No matter how Maryland fares in the regular season finale against No. 15 Penn State, it won’t change the pride that interim coach Matt Canada feels about the way his players have performed under extremely difficult circumstances. (AP Photo/Nick Wass, File)

The three-year starter helped raise the bar at Penn State, where he's delivered wins and seized accolades and records.

There's still more for Penn State's all-time winningest quarterback to do before saying farewell. That includes Saturday, when the No. 15 Nittany Lions (8-3, 5-3 Big Ten, No. 12 CFP) will host Maryland (5-6, 3-5) in the regular season finale.

One more victory would secure a fitting send-off for 21 seniors — ideally, somewhere sunny during the holidays.

"It's tough to not think about (the end)," McSorley said. "Understanding the magnitude of it all and everything that's gone into it."

McSorley would know. When he arrived, the program was trying to rebuild in the aftermath of the Jerry Sandusky scandal. On the field, that meant ho-hum, middle-of-the-pack results.

McSorley helped turn that around.

As the quarterback for one of the country's most prolific offenses, McSorley has helmed more wins (30) than any other Penn State quarterback. Those include a 24-3 stretch from Oct. 1, 2016 to Sept. 21, 2018, when the Nittany Lions won a Big Ten championship and barely missed out on playoff spots in back-to-back seasons.

Past successes have made this season — wrought with three losses — tougher to digest.

"What I'm most proud of is how far this team has come over those five years from where we started to where we're going to be finishing up this year," McSorley said. "And all the things we've been able to accomplish over my time."

The Terrapins can become bowl eligible with a win after missing out on the postseason a year ago. They nearly got their sixth win last week but lost on a failed 2-point conversion going for the win in overtime against Ohio State.

"Our players know what six wins means," Maryland interim coach Matt Canada said. "They've certainly laid it out there the last two weeks and have come up, had two emotional, tough losses. They know where they're at. They know how important this game is."

Penn State's defense has given up 17 points and 503 yards over the last two games after allowing 42 points and 403 yards in a loss at Michigan.

The aggressive play of Penn State's front seven has contributed. In that span, the Nittany Lions have nine sacks and 18 tackles for loss.

Maryland will likely lean on freshman running back Anthony McFarland if the Terrapins want to break their three-game skid.

McFarland racked up 298 rushing yards and scored twice against the Buckeyes. He's averaging more than eight yards per carry but hasn't gotten much blocking help deep in opponents' ends. His pair of touchdowns last week put him at four on the season, and none of them came in the red zone.

"He can flat-out run," Franklin said. "You watch him on tape, he is fast, and makes a bunch of big plays for them."

The Nittany Lions have made plenty of mistakes this season. They've lost at least one fumble in eight straight games and are just plus-2 in turnover differential.

The Terrapins, meanwhile, are tied for first in the country with 18 interceptions and sit at plus-8 overall. Both teams have forced as many turnovers as they've committed over the last three games, however.