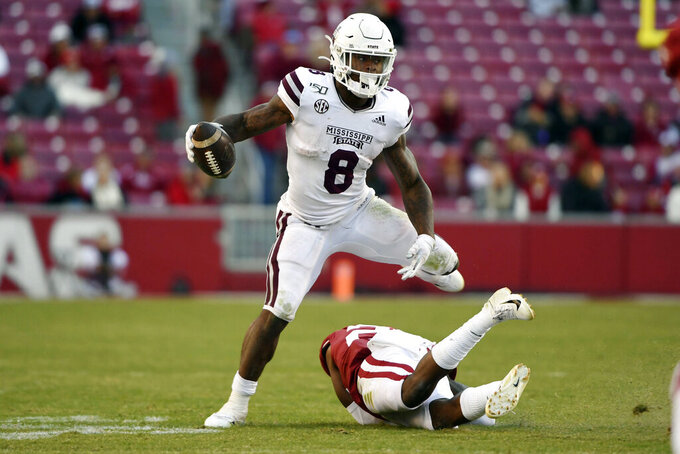 Mississippi State running back Kylin Hill (8) shakes Arkansas defender Andrew Parker as he runs for a gain during the second half of an NCAA college football game, Saturday, Nov. 2, 2019 in Fayetteville, Ark. (AP Photo/Michael Woods)

STARKVILLE, Miss. (AP) — Mississippi State is spending its off week looking to maintain the momentum it picked up by ending a four-game skid in convincing fashion.

The Bulldogs ended their losing streak last week with a 54-24 blowout of struggling Arkansas. With his team needing a win just to gain confidence, coach Joe Moorhead was excited to get a road victory regardless of the opponent.

"I'm excited about our team's performance against Arkansas. I thought the kids played hard and competed well," Moorhead said. "I thought we executed cleanly in all three phases. I'm excited to head into the bye week and get some of our young guys a lot of developmental work and get on the road recruiting."

Mississippi State won three of its first four games, but that four-game skid pushed the Bulldogs below the .500 mark. The margin for error is quite thin concerning Mississippi State's pursuit of a 10th straight bowl appearance.

Moorhead said this week is more about development than preparing for an opponent.

"No Alabama work yet and we start that on Sunday," said Moorhead. "But it's been a lot of fundamental and technique work. A lot of seven-on-seven, a lot of one-on-one, and a bunch of team and special teams.

"And focusing on the developmental aspect of it. Where normally the ones and twos get the most reps and then the younger guys and the redshirts, well they've been on scout team now. But we flipped that. So it was great to see all these true freshmen, redshirt freshmen and young guys get in there for a bunch of reps. And it was really exciting."

Mississippi State's performance against Arkansas was encouraging because it continued the resurgence of the Bulldogs' rushing attack.

In losses at Auburn and Tennessee last month, Mississippi State average just 119.5 yards rushing per game. But that trend took a step forward two weeks ago with a 240-yard rushing effort in a loss at Texas A&M.

The Bulldogs followed that up by rushing for 460 yards at Arkansas, their highest SEC single-game rushing total ever. Kylin Hill had a career-high 234 yards against Arkansas while teammate Nick Gibson also rushed for a career-high 129 yards.

"We've been in a slump," Hill said. "Games like this, when you win like that, it gives guys motivation."

The fireworks in the running game allowed for a smoother outcome in the passing game, which has struggled at times this year. Tommy Stevens completed 66 percent of his passes for 172 yards and two touchdowns against Arkansas.

"We've said a bunch of times the success of our offense is predicated on the ability to run the ball successfully," Moorhead said. "The guys did a great job of getting movement at the line of scrimmage and being physical."

Stevens, a Penn State graduate transfer, was injured for most of October while freshman Garrett Shrader moved into the starting lineup. Once Stevens was completely healthy, he got back into the mix and responded well.

Stevens has completed 63.2 percent of his passes for 687 yards with seven touchdown passes. He also looked comfortable last week in the run game and rushed for 74 yards.

"We brought him in later in the week and said, 'Listen, I know you're finally healthy and to win this game we're going to need you to use your arm as well as your feet'," Moorhead said. "It's one thing for him to be healthy and comfortable running again, and I thought he did a real nice job of running the ball."

The Bulldogs need to win two of their last three games to become bowl eligible, and they'll be heavy underdogs against Alabama. Moorhead realizes the challenge ahead, especially for Mississippi State's defense.

"Where do you start?" Moorhead said. "Offensively, they have a big, strong, athletic and physical offensive line. I think between Alabama and LSU, you're looking at the best two receiving corps in the country. They're very experienced and productive at quarterback and have a stable of running backs and their tight ends are very effective."