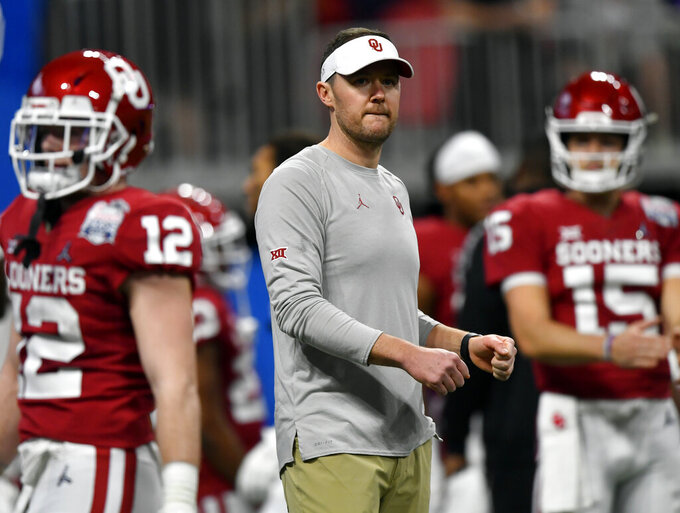 FILE - In this Dec. 28, 2019, file photo, Oklahoma head coach Lincoln Riley, center, stands with his team before the Peach Bowl NCAA semifinal college football playoff game against LSU in Atlanta. College football teams set to play this fall are trying to help their depth amid the coronavirus pandemic by finding players capable of playing multiple positions. Riley says it is “something every coach in the country is thinking about right now.” That's because positive tests, contact tracing and quarantines could abruptly alter any roster. (AP Photo/John Amis, File)

RALEIGH, N.C. (AP) — North Carolina's Trey Morrison entered preseason camp set to play nickelback, only to start working at free safety with the goal of being ready to play anywhere in the secondary on short notice.

That’s because the 18th-ranked Tar Heels, like many teams, are preparing for roster uncertainty sure to come amid the coronavirus pandemic. Positive tests, contact tracing and quarantines could abruptly alter any roster along with the injury risk that has long been part of the game.

Training players for multiple positions could help teams navigate through it all.

“I think it’s very important because you really know with football, you don’t know what’s going to happen,” Morrison said. “You don’t know if somebody’s going to get injured or sick or anything with COVID right now. I think it’s a great idea to just keep people ready so there’s no beat missed.”

That challenge faces the handful of leagues planning fall seasons, headlined by the Atlantic Coast, Big 12 and Southeastern conferences.

Teams could lose a starter with no warning after a positive test, along with teammates at the same position through contact tracing – which identifies individuals exposed through close contact – and quarantine. That’s why many teams have players training at multiple positions to give themselves as many options as they can, such as Wake Forest coach Dave Clawson saying the Demon Deacons have given safeties reps at cornerback and linebacker.

As Clawson put it: “There's just a lot more what-ifs.”

“I think it’s something every coach in the country is thinking about right now,” said Lincoln Riley, coach at No. 5 Oklahoma. “You always have contingency plans if the worst of the worst happens. Now the difference here is … it’s probably more possible than it’s ever been – not probably, it is.

“In the past, (it’s) what happens if two safeties get hurt during a game," Riley added. "Now it’s what happens if I don’t have a safety even available to play – period. The worst possible scenario is now way worse.”

College teams have long used positional cross-training to improve depth or mask a lack of it throughout a two-deep depth chart. ACC Network analyst Eric Mac Lain, an offensive lineman on Clemson's national runner-up team in 2015, said its importance now is “at an all-time high.”

“It’s going to be interesting to see how teams prepare for it, if they’re prepared for it and who kind of rises to the top," he said. "Because there’s no doubt that we’re going to have guys miss games. It’s just a matter of who and when.”

Indeed, numerous schools have had to pause preseason workouts amid coronavirus concerns. That includes North Carolina State, which halted athletics activities due to a cluster and postponed its Sept. 12 football game at Virginia Tech for two weeks.

In the Big 12, Texas Tech has practiced without at least 20 players who tested positive and more being isolated, with coach Matt Wells saying the team had offensive linemen preparing for multiple spots up front. Riley said the Sooners recently had a position group sidelined except for one person through pre-scrimmage testing, prompting “some on-the-job training” for players at different positions.

In the SEC, Auburn coach Gus Malzahn said the 11th-ranked Tigers limit positional cross-training to older players such as junior Smoke Monday, a likely starter at safety who is also working at cornerback.

“If you ask a young guy to play two positions, you’re not going to build a foundation,” Malzahn said. “He’s not going to be his best at either one of them. The older guys that kind of understand the big picture, they’re going to be able to play multiple positions.”

Similarly, South Carolina junior cornerback Israel Mukuamu is working at safety with his 6-foot-4 frame, with coach Will Muschamp saying Mukuamu “can play anything.”

“I definitely feel like I’m a corner, but I’m a guy that you can move me around,” Mukuamu said. “I can go back to safety if I have to. It’s good to show your versatility.”

Morrison feels the same way, noting it could eventually help the junior's chances of pursuing an NFL career. Tar Heels coach Mack Brown said the goal is for Morrison to learn five secondary spots along with his previous experience at cornerback. The team is also working linebacker and NFL prospect Chazz Surratt as a pass-rushing end.

“We feel that with cross-training, that will help us create depth if we have some injuries or you have some guys that are held out because of a positive test and you didn’t know it until like Thursday, Friday morning (when) somebody tells you that a guy’s out,” Brown said. “You’ve got to be prepared to move forward.”