New chancellor: Vanderbilt will spend to compete in SEC 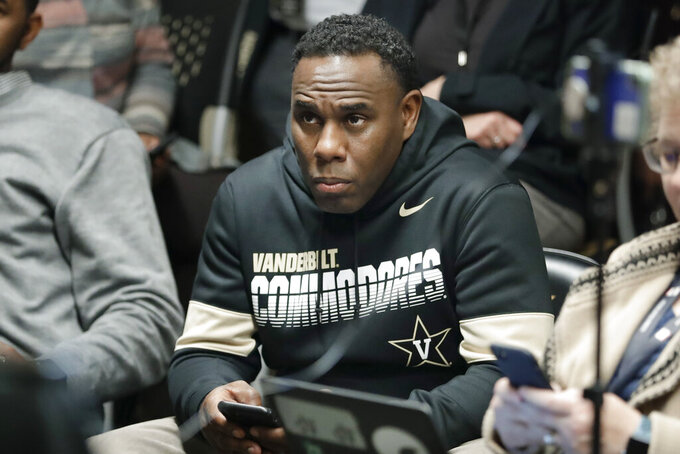 FILE - In this Feb. 5, 2020, file photo,, Vanderbilt football coach Derek Mason listens as interim athletic director Candice Lee answers questions during a news conference in Nashville, Tenn. Vanderbilt athletic director Candice Lee said Monday that Vanderbilt has an opportunity to put its money where its mouth is and prove its commitment to football as they search for a new football coach to replace Derek Mason, who was fired Sunday.(AP Photo/Mark Humphrey, Fiole) 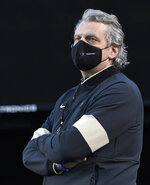 NASHVILLE, Tenn. (AP) — Vanderbilt is looking for a new football coach, and the new chancellor and athletic director want to make clear that person will have a say in how the university improves their facilities.

And Vanderbilt will be ready to spend money to make those improvements not only reality, but worthy of being a charter member of the Southeastern Conference.

“We can do a lot," Chancellor Daniel Diermeier told The Associated Press on Wednesday. "And we have an enormous amount of assets and we need to bring them, we need to leverage them in order to advance athletics at university as a whole.”

Vanderbilt fired coach Derek Mason on Nov. 29 after losing the first eight games of his seventh season. Athletic director Candice Lee, who had the interim title removed in May, said this gives Vanderbilt a chance to show its commitment to competing in the SEC.

The SEC's lone private university has the league's smallest football stadium, which had its last major renovations in 1981.

Lee was a women's basketball player on teams that reached two Elite Eights in the NCAA Tournament. Diermeier is a native of Germany and fan of Borussia Mönchengladbach in the Champions League. He also has worked at Stanford and Northwestern in his career, seeing how both paired academic and athletic success.

Diermeier said assessing the situation was his first task at Vanderbilt after being provost at the University of Chicago, now Division III but where Jay Berwanger was the first Heisman Trophy winner in 1935.

Both Diermeier and Lee said Vanderbilt also has work to better connect with their fans and alumni. Lee said they're being very intentional and strategic.

“Everything that we’re doing is deliberate with a clear vision and an end goal in mind,” Lee said.

Diermeier also sees men's basketball as an area for improvement. Coach Jerry Stackhouse is in his second season after taking over a program that lost 26 straight SEC games before snapping that skid last February. The Commodores play in Memorial Gym, which is the SEC's oldest basketball arena.

Diermeier said the new football coach will be a partner in building the program and deciding what investments are needed to help athletes on and off the field. Vanderbilt built an indoor practice facility in 2013 under coach James Franklin, who's now at Penn State.

Over the past couple decades, Vanderbilt has unveiled plans to upgrade the football stadium with results mostly focused on cosmetic issues. Diermeier noted how the NHL's Chicago Blackhawks wooed back fans after years of struggles and the pain of the “ double doink ” field goal miss by Chicago in the NFL playoffs.