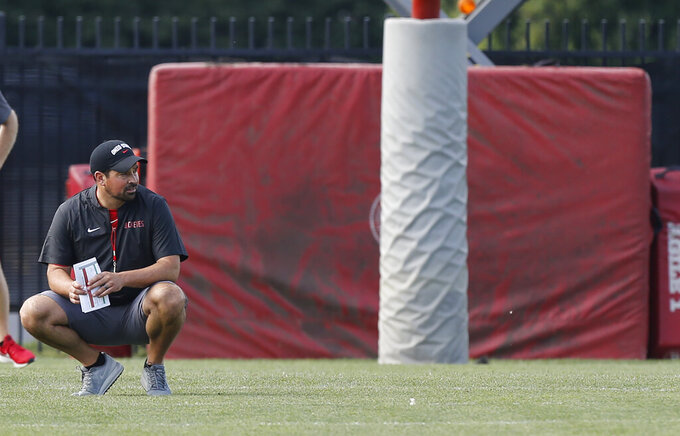 COLUMBUS, Ohio (AP) — Unlike last year at this time, Ohio State's preseason camp is being conducted without public drama over misbehaving assistant coaches, domestic violence allegations and questions about the limits of a head coach's responsibility.

It's been all about football, and nobody could be happier than the new head coach, Ryan Day, who as offensive coordinator last year was thrust into the interim head role after Urban Meyer's three-game suspension for mismanaging domestic violence allegations against a former assistant.

Day is the man now, named to succeed Meyer when the coach who brought a national championship to Ohio State in 2014 retired after last season because of health issues.

While Meyer lends his expertise to Fox's new college football pregame show and makes plans to open a restaurant in the Columbus suburbs, Day is working closely with his new starting quarterback, Georgia transfer Justin Fields , whose performance will be key to the Buckeyes' hopes of returning to the College Football Playoff for the first time since the 2016 season.

"A lot of people come up and they say, 'A lot of pressure,' or they start talking about the expectations," Day said. "That's a big thing that I get a lot. It's been the same thing all along. I say you can't worry about that. And people ask me what if you don't beat (Michigan), what if you don't win the Big Ten championship or a national championship, and I always come back with, 'Well, what if I do?' And that's the mentality I've always had."

Fields was one of the nation's top high school recruits at any position in 2018 , landing at Georgia and then seeing only limited playing time behind Jake Fromm last season.

Day scored the first major coup of his tenure by luring the dual-threat Fields, who was impressed by the coach's work last season with Heisman Trophy finalist Dwayne Haskins Jr.

"He's got a very live arm, he's got really good feet," quarterbacks coach Mike Yurcich said of Fields. "Obviously, physically, being 225 pounds and being able to run as fast as he can makes him a special, unique individual."

Having 1,000-yard rusher J.K. Dobbins behind him as the featured back should help Fields until he finds his feet.

Hill is just 47 catches behind David Boston's career receptions record of 191, so he should reach that mark if he stays healthy.

INEXPERIENCE BUT DEPTH UP FRONT

As usual, Ohio State has a bunch of huge, talented offensive linemen waiting their turn but has just one returning starter from last season.

Left tackle Thayer Munford is the only first-team returnee. Fifth-year senior Branden Bowen has seen his Ohio State career hampered by leg injuries but is a likely starter at right tackle, though he's being pushed in training camp by freshman Nicholas Petit-Frere.

Josh Myers, a converted tackle who is 6-foot-7 and 315 pounds, is set to replace All-American Michael Jordan at center. Jonah Jackson, a graduate transfer from Rutgers, is the presumptive left guard, with Wyatt Davis at right guard.

"I feel as good as I've felt in the last couple years in terms of our depth," Day said. "We have seven or eight guys that can get in there right now and play."

Day replaced four of the five defensive coaches after a sub-par year from that unit. They include two from rival Michigan, new defensive coordinator Greg Mattison and linebackers coach Al Washington.

The defense was a consistent problem for the Buckeyes last season, and Day hopes the new coaches and a new scheme can revitalize an experienced group.

At home Aug. 31 against the Lane Kiffin-led Florida Atlantic Owls. If Fields performs as expected and the defense better, the Buckeyes should be in the mix for the College Football Playoff after finishing just out of the top four the last year.