No. 15 Coastal Carolina looks to keep rolling vs. Red Wolves 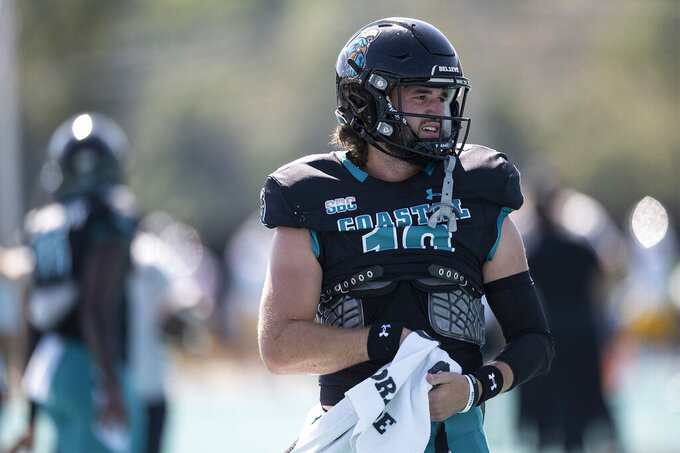 Line: Coastal Carolina by 19 1/2, according to FanDuel Sportsbook.

Coastal Carolina's try at starting 6-0 for a second straight year. The Chanticleers opened with 11 straight victories in 2020, the longest win streak of its kind in Sun Belt history. Arkansas State has lost six of its past seven league games including a defeat by Georgia Southern a week ago to open conference play.

Coastal Carolina QB Grayson McCall vs. Arkansas' pass defense. McCall is No. 1 in the FBS in completion percentage (80.2) and passing efficiency. He's thrown for 1,113 yards and 10 touchdowns with just one interception. The Red Wolves are last in the Sun Belt in points allowed and overall defense.

Coastal Caorlina RB Shermari Jones. The senior tailback rushed for more than 100 yards in two of the first three games before missing the last two due to injury. Jones is expected to be ready to go against Arkansas State, which gives up 257 rushing yards per game, the most in the Sun Belt.

Arkansas State QB James Blackman: The former Florida State passer is second in the Sun Belt in total offense and passing yards a game. Blackman will have to be on target against a Coastal Carolina team that is giving up just 130 yards a game through the air and has not allowed a TD pass.

Coastal Carolina has won its last six regular-season road games including a 28-25 win at Buffalo in its only away game this season. ... Arkansas State won the first three matchups with Coastal after the Chanticleers joined the Sun Belt five seasons ago. The Red Wolves lost to Coastal 52-23 last year. ... Coastal Carolina is averaging 8.28 yards per play, second only to Ohio State's 8.57 per snap in the FBS. ... Corey Rucker has emerged as Blackman's favorite targets this season, with 21 catches for a team-best 372 yards and four touchdown receptions. ... Coastal Carolina receiver Javion Heiligh has 100 yards or more in five of his past seven games. ... Arkansas State's Blackman had 43 TD passes with Florida State from 2017-20. He's had eight so far for the Red Wolves.