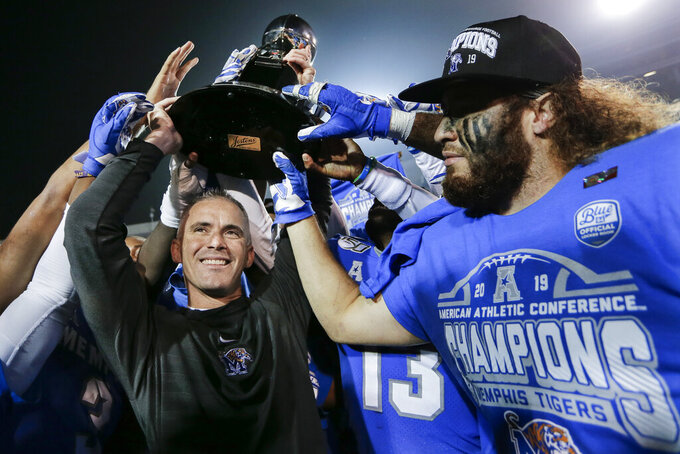 MEMPHIS, Tenn. (AP) — Memphis has named Ryan Silverfield as the Tigers' interim coach, and athletic director Laird Veatch will oversee the search to replace Mike Norvell after he was introduced as Florida State's new coach.

Silverfield was Norvell's deputy head coach and co-offensive coordinator in Memphis' best season yet, and he will be a candidate to replace his former boss.

Veatch said Sunday during a 75-minute news conference that Memphis will move quickly to replace Norvell.

The current plan is for Silverfield to coach the No. 15 Tigers (12-1) in the Cotton Bowl against Penn State on Dec. 28. They landed the spot in the Cotton Bowl after beating Cincinnati 29-24 in the American Athletic Conference championship Saturday. Veatch said both Memphis and Norvell would like to see him coach the Tigers in that game, but that decision won't be made until Norvell sees how his schedule unfolds at Florida State.

Silverfield also might coach the Tigers in the bowl game with assistance possible from Norvell.

Veatch said Memphis will not hire a firm to oversee the Tigers' first search for a football coach since 2015 when Norvell was hired to replace Justin Fuente. Veatch said he will not be commenting on the search but wants the best fit for a program playing in its first New Year's Six bowl.

The athletic director said Memphis is clearly not a program that is in rebuilding mode.

Norvell went 38-15 in his four seasons at Memphis, and Silverfield was with Norvell and the Tigers from the start in 2016.

Silverfield helped coach Kevin Smith at UCF in 2007 when he led the nation with 2,567 yards rushing, and he has coached in the NFL with Minnesota when Adrian Peterson ran for 2,097 yards. At Memphis, Silverfield was the offensive line coach and run game coordinator in 2018 before being promoted to deputy head coach for this season.

The interim coach made it clear he hopes to have that tag removed once the coaching search ends, saying this is the job he wants.