No. 15 Texas meets Kansas and still in Big 12 title chase 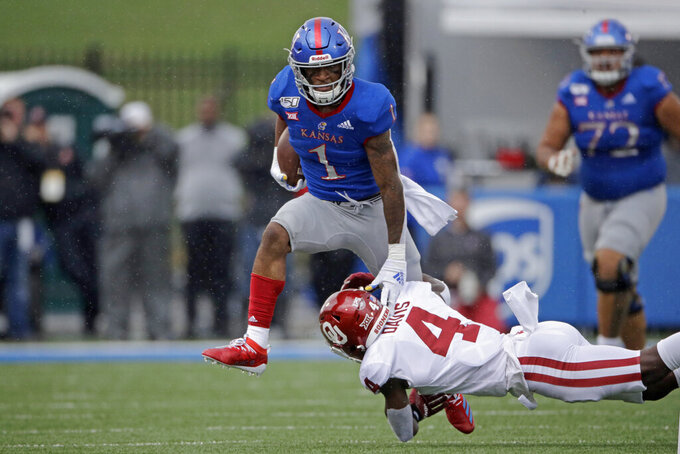 The Longhorns are likely out of the College Football Playoff hunt with two losses, and Sam Ehlinger's Heisman hopes are dashed. But team and quarterback are still very much in the hunt for the Big 12 championship. Kansas is looking for its first Big 12 win under coach Les Miles, and there would be no bigger place to get it than Austin.

The play-calling matchup of new Kansas offensive coordinator Brent Dearmon vs. Texas defensive coordinator Todd Orlando. Dearmon will be an unknown for the Longhorns. He was the head coach at Bethel University last season and was promoted to Jayhawks coordinator last week when Kansas was off. Orlando must dial up the right calls for a defense trending to rank among the worst in school history.

Kansas: Running back Pooka Williams is one of the toughest rushers in the Big 12 and will be a load for a Texas defense that is struggling to tackle. Williams ran for 137 yards — a clip of six yards per carry — two weeks ago against Oklahoma. He's likely to remain a featured played with Dearman calling the plays.

Texas: Center Zack Shackelford struggled to pick up stunting linebackers last week as the Longhorns surrendered a school-record nine sacks to Oklahoma. It's Shackelford's job to call pre-snap protections and Texas often looked confused while Ehlinger was on the run or getting knocked down.