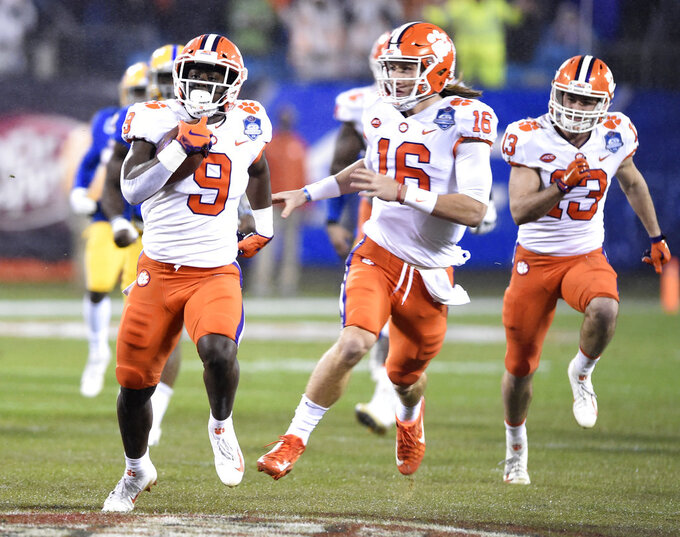 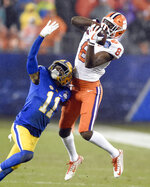 CHARLOTTE, N.C. (AP) — Exactly 10 years after being hired as head coach, Dabo Swinney made history with the Clemson Tigers.

"You can't be the best ever if you don't do things that have never been done," a triumphant Swinney said after the game.

Clemson (13-0, CFP No. 2) is expected to face third-ranked Notre Dame in the College Football Playoff on Dec. 29, though the field won't be set until Sunday.

As Swinney held up the championship trophy on the field after the game, he shouted to thousands of waterlogged fans clad in orange rain jackets: "I think we should just come back and do it again next year!"

"It's incredibly difficult to have the consistency that we have had," Swinney said.

Clemson turned to its running game and piled up 301 yards and four touchdowns and averaged 9 yards per carry on a night in which Lawrence was limited to 118 yards passing.

The defense forced three turnovers, including two in the first half that gave the offense the ball inside the Pitt 10 and led to 14 points. The Tigers limited Panthers quarterback Kenny Pickett to 8 yards passing and had nine tackles for a loss, including two sacks.

The Tigers entered the game as a 27 1/2-point favorite and Swinney's team looked as if it would put Pitt away early after Etienne scored on his first two carries.

The ACC player of the year took a handoff on the first play from scrimmage, ran to the right, cutback and raced 75 yards for his 20th touchdown of the season — the quickest TD in the conference championship history. He added a second scoring run a few minutes later after Isaiah Simmons stripped Pickett of the ball and Christian Wilkins return it to the Pitt 3.

"All of that credit goes to the offensive line because they come in and grind every day of the week," Etienne said.

Pitt (7-6) would show signs of life though, scoring 10 straight points behind a 1-yard TD run by Qadree Ollison to cut the lead to 14-10.

But Lawrence found his fellow freshman Higgins on TD passes of 5 and 10 in the second quarter, the latter coming after a 38-yard interception return by A.J. Terrell, to take a 28-10 lead at halftime. Adam Choice and Lyn-J Dixon added fourth quarter touchdown runs for the Tigers.

Pitt coach Pat Narduzzi has faced Clemson and Notre Dame this season and said there is "no comparison" between the two teams.

"Clemson is the best football team we have faced this season and they will probably win a national championship in my opinion," Narduzzi said. "That's a good football team from the front end to the back end."

Swinney said if the Tigers wind up facing No. 1 Alabama in the College Football Playoff for the fourth straight year he would consider it a rivalry.

"I think four would make it a rivalry," Swinney said, whose team is 1-2 against the Crimson Tide the last three years. "And we need to beat them more, too. It ain't much of a rivalry when you are losing, so we gotta win more."

"There is nobody other than Kenny Pickett I would want to lead our offense," Narduzzi said. "He's played unbelievable this year. ... It starts with protection and when he gets time he can be effective and when he doesn't nobody is going to be effective. When you are running for your life back there it is not easy."

Said Pickett: "It's a tough loss, but I'm not going to let this game define me."

The Tigers' experienced and heralded defensive front of ends Clelin Ferrell and Austin Bryant and tackles Wilkins and Dexter Lawrence dominated the line of scrimmage.

Said Pitt running back Darrin Hall: "They're the number two team in the country for a reason. They brought the energy."

Pitt: The Panthers need to make major strides in the passing game to take the next step in the ACC. But the Panthers did run for nearly 200 yards and Ollison and Hall became the first Panthers tandem ever to both surpass 1,000 yards rushing in a season. They will need more balance moving forward.

Clemson: The Tigers won their 13th game for the third time in four seasons, continuing a remarkable run under Swinney. Their offense struggled at times and Lawrence wasn't particularly sharp, which could be a concern moving forward against better competition. The weather didn't help either team in the passing game.

Pitt: The Panthers will wait to see where they are headed for a bowl game.

Clemson: The Tigers advanced to the playoff for the fourth straight season. At least one more game is coming this season. Clemson is hoping for two.