No. 9 Florida plays Towson in search of 9th straight win 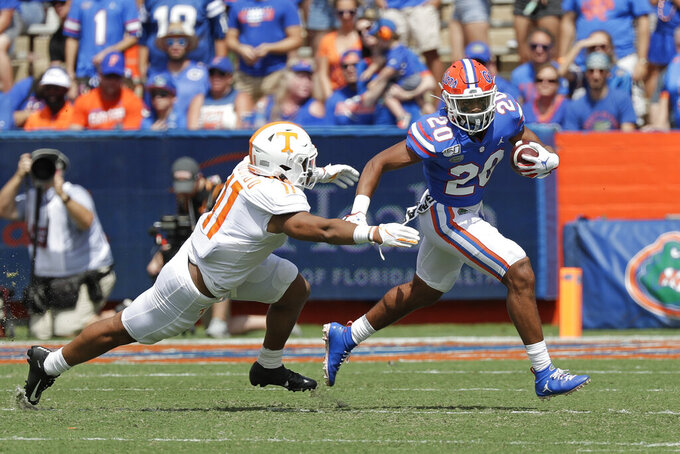 Florida running back Malik Davis (20) tries to get past Tennessee linebacker Henry To'o To'o, left, during the first half of an NCAA college football game, Saturday, Sept. 21, 2019, in Gainesville, Fla. (AP Photo/John Raoux)

Florida's eight-game winning streak, tied for the program's longest since 2008.

Florida's offensive line versus Towson's defensive front. The Gators have yet to really control the line of scrimmage, struggling to run the ball against everyone — even lower-division Tennessee-Martin. Florida ranks 12th in the SEC and 91st in the nation in rushing, an area that needs improvement before facing heavyweights Auburn, LSU and Georgia.

Florida: DE Jonathan Greenard is tied for the SEC lead with 5 ½ tackles for loss and ranks second in the league and 19th nationally with 3 ½ sacks.

an hour ago
By Brett Martel 4 hrs ago
By The Associated Press 5 hrs ago
By Cliff Brunt 6 hrs ago
By W.g. Ramirez 6 hrs ago