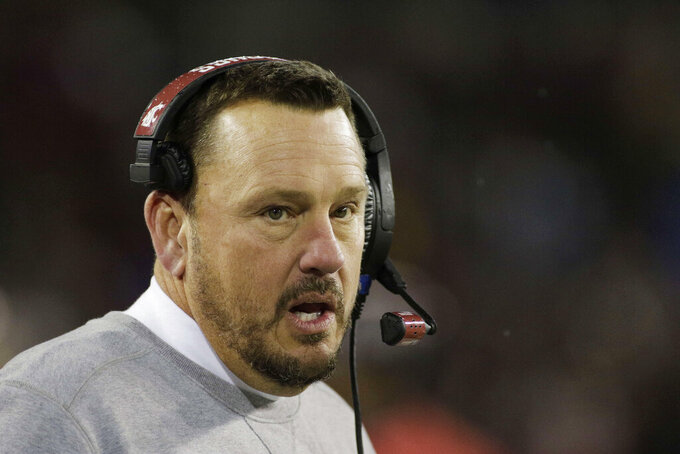 FILE - Washington State linebackers coach Ken Wilson looks on during the second half of an NCAA college football game against California in Pullman, Wash., on Nov. 3, 2018. Nevada has hired Wilson as the Wolf Pack's new head coach. Wilson, 57, was the linebackers coach at Washington State for five years before he accepted the same job at Oregon in 2019 and was promoted to co-defensive coordinator for the Ducks this season. (AP Photo/Young Kwak, File)

Wilson, 57, was the linebackers coach at Washington State for five years before he accepted the same job at Oregon in 2019 and was promoted to co-defensive coordinator for the Ducks this season. Before that, he served as an assistant at Nevada for 19 years, most recently as associate head coach in 2012.

“We are thrilled to welcome Ken and his family back to Nevada,” Knuth said in a statement. “The Wilsons have very deep ties to this university, Wolf Pack athletics and to the Reno community and have been part of some of the most successful teams in program history.”

Nevada played in 11 bowl games while Wilson was an assistant, including each of his last eight seasons, and claimed two titles in the Western Athletic Conference, five in the Big West and two in the Big Sky. The school is now a member of the Mountain West Conference.

“I couldn’t be happier about becoming the 27th head coach in Nevada football history,” Wilson said. “It’s a dream come true and a job that I have always hoped and worked toward. Becoming a reality like this is fantastic.”

Norvell spent five seasons at Nevada, where the Wolf Pack had an 8-4 record this season and earned a spot in the Quick Lane Bowl against Western Michigan on Dec. 27. Nevada assistant coach Vai Taua will serve as the interim coach for the bowl game.