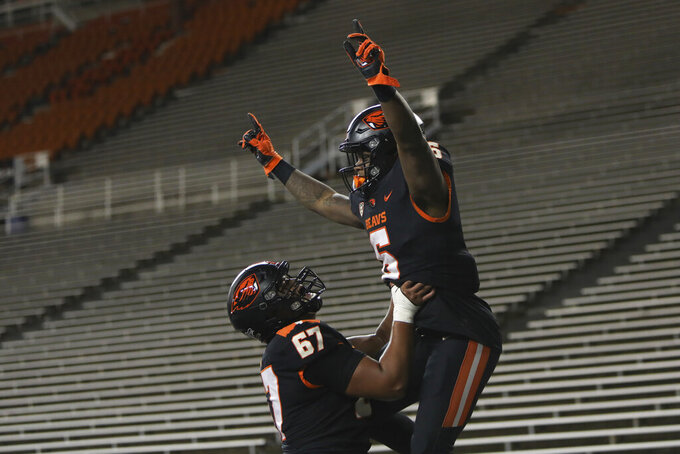 CORVALLIS, Ore. (AP) — Oregon State running back Jermar Jefferson is recapturing the success he had as a freshman, even in this unusual season.

The former Pac-12 Freshman of the Year has rushed for at least 100 yards in each of the Beavers' three games, including 196 yards last weekend in a victory over California.

Jefferson, a junior, ran for 75 yards and a touchdown on Oregon State's first play from scrimmage and the Beavers went on to win the back-and-forth game 31-27. He earned Pac-12 Player of the Week honors for the effort.

He leads the Pac-12 with 449 rushing yards through three games and is on pace for a 1,000-yard season, even though the league's teams are playing just seven games because of the coronavirus pandemic. While teams nationwide face cancellations because of COVID-19, Jefferson said the Beavers have been fortunate that Oregon State has been able to play its games so far.

“I'm coming to practice every day, keep working and trying to find new things that I'm bad on to work on,” he said. “Just trying to come back, and come back to practice, and getting better.”

“I think he has good vision, we talk about that, I think he sees and is able to understand the run scheme we've got going, and see things and make cuts, get vertical,” Oregon State offensive coordinator Brian Lindgren said. "And then the other thing I think he's doing a nice job with right now is his yards after contact. He's running through arm tackles and he's able to create some explosive plays that way.

“I've been really impressed with the way he's moving, and how he's played the first three games.”

Last season, Jefferson ran for a 19-yard touchdown in a 24-10 loss to the Ducks, finishing with 81 yards on 20 carries. The game ended a difficult season for Jefferson, who struggled with injuries and finished with 685 rushing yards and eight touchdowns in nine games, including six starts.

Jefferson had gained national attention in 2018, rushing for 1,380 yards, most in the nation for a freshman. His 254 yards against Arizona State set an Oregon State single-game record. He had 12 touchdowns, including four TDs apiece against Southern Utah and Washington State.

In a 38-35 victory over UCLA last weekend, the Bruins managed to collect 267 yards on the ground against the Ducks.

“I've got to think they're preparing to be able to slow Jermar down, and they want to do that,” Beavers coach Jonathan Smith said. “So we've got to be able to play some balanced football to have success."

For his career, Jefferson ranks seventh on Oregon State's career list, with 2,514 total yards. He has had 13 games with 100 or more rushing yards, good for fifth in Beavers' history.

So the Ducks are clearly wary of Jefferson. And again, vision comes up.

“He’s got everything the great backs have,” Oregon coach Mario Cristobal said. “It starts with great vision. Then you go and start talking about his speed, his power and his explosiveness. He sets up blocks really, really well. He can make you miss. He can run over you. He can run through you. He’s effective out of the backfield catching the ball. He blocks really, really well. I think he helps himself with the gifts that he has, plus the scheme and the supporting cast make for a really challenging offense to stop.”