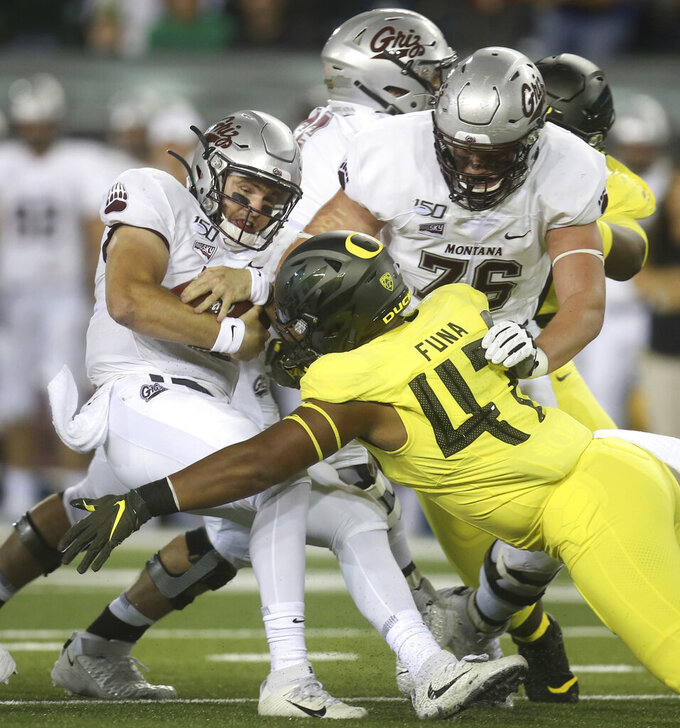 EUGENE, Ore. (AP) — Justin Herbert isn't satisfied yet but he's confident that the Ducks are on the right path.

The senior quarterback threw for 316 yards and five touchdowns in No. 15 Oregon's 35-3 victory Saturday night over Montana, the Ducks' final tuneup before opening Pac-12 play at Stanford next week.

Jacob Breeland and Johnny Johnson III each caught a pair of touchdowns for the Ducks (2-1), who won their 25th straight nonconference game at Autzen Stadium.

"I think we've been doing some good things and definitely some stuff we can learn and fix, but I like the direction we're going in and I like the guys who've stepped up and made plays," Herbert said.

Herbert has thrown for a touchdown in 31 straight games, the longest current streak in the nation. It was his fifth career five-touchdown game, most by an Oregon quarterback. Marcus Mariota had four.

"We need to get better. We lost," Montana coach Bobby Hauck said when asked what his team can take away from the game. "We came here to win, and we didn't do it."

Oregon was coming off a 77-6 rout of Nevada that helped get the team back on track after a disappointing loss to Auburn in the season opener. Herbert also threw five TDs against the Wolf Pack and now has 11 for the season.

"We're a real brotherhood this year, and you know it's a real family on this team and I think he (Herbert) knows that and he's a big part of this family and we all look up to him," Johnson said.

Herbert made his first 10 passes of the game for 113 yards and two scores, both to Breeland.

Oregon scored on its first drive when Herbert connected with Breeland on a 5-yard touchdown pass. Ducks linebacker Mase Funa ended Montana's opening drive when he sacked Sneed. Funa, a true freshman, went into the game with four tackles for loss to lead the Pac-12.

Breeland caught a 17-yard scoring pass before the first quarter was over to make it 14-0.

As time wound down in the half, Herbert's pass on a fourth-and-1 attempt was incomplete, giving the ball to the Grizzlies on their own 45. But the drive ended when Brandon Purdy's 50-yard field goal attempt was short.

With 10 seconds left, Herbert shook off a defender for an 18-yard pass to a diving Johnson in the end zone, sending the Ducks into the break with a 21-0 lead.

Herbert found Johnson with a 1-yard TD pass in the third quarter, before a 10-yard scoring pass early in the fourth to Jaylon Redd.

Oregon was without graduate transfer Juwan Johnson for the third straight game because of a leg injury. Johnson was expected to be one of Herbert's top targets this season.

Montana: The Grizzlies will make $650,000 for the visit to Eugene. Hauck was asked about those guarantee games during his Monday news conference. ... Montana had scored 92 points in its first two games. ... Sneed, who started his career at UNLV, was the Big Sky's newcomer of the year last season, when he led the Grizzlies in both passing and rushing. He threw for 2,723 yards and 22 touchdowns while rushing for 675 yards and two more scores.

Oregon: Travis Dye led Oregon's rushers with 17 carries for 101 yards. ... The Ducks now lead the series 8-0-1 with all the games played in Eugene. The closest the Grizzlies came was a 14-all tie in 1952. ... Oregon senior point guard Peyton Pritchard announced the Ducks' starters before the game.

SMOOTH OPERATOR: Hauck, who has a connection to the Herbert family, had high praise for the senior quarterback.

"His dad went to Montana for a couple of years. Mark was at Montana when we were there. I think he was a sophomore when I was a freshman," Hauck said. "He's a good player. You guys know, I talked about him all week. I had high regard for him before the game. I just think he's a smooth operator."

Montana: The Grizzlies host Monmouth of the FCS-level Big South Conference on Saturday.

Oregon: The Ducks open league play on Saturday at Stanford, which lost 45-27 to No. 17 UCF this weekend.