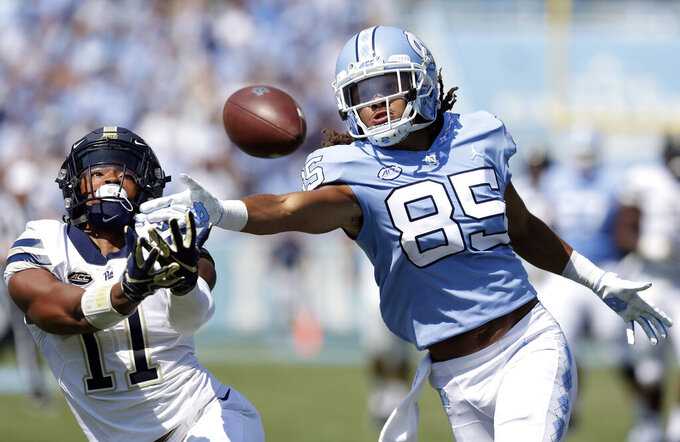 FILE - In a Saturday, Sept. 22, 2018 file photo, Pittsburgh's Dane Jackson (11) and North Carolina's Roscoe Johnson (85) reach for a pass during the first half of an NCAA college football game in Chapel Hill, N.C. Pittsburgh and Eastern Michigan will meet in the Quick Lane Bowl, on Dec. 26, 2019, hoping to end postseason droughts. (AP Photo/Gerry Broome, File)

Pittsburgh coach Pat Narduzzi needs to win a bowl game after going 0-4 in his first four seasons. The Panthers and their fans had sights set on a bigger bowl after starting 7-3, but they settled for the Quick Lane Bowl after losing their last two games. Eastern Michigan would like to win a bowl for the first time in program history. The Eagles, though, have accomplished a lot by just making it to a second straight bowl game and third in four years under coach Chris Creighton.

Pitt’s pass defense vs EMU QB Mike Glass. The Panthers give up just 195.6 yards passing per game, ranking 20th in the country. The 6-foot, 209-pound senior is averaging 260 yards passing, completing 68% of his attempts with 22 touchdowns and 10 interceptions.

Pitt: DT Jaylen Twyman. He leads the team with 10½ sacks, ranking 15th in the country, and the redshirt sophomore may enter the NFL draft.

EMU: OT Steven Nielsen. The Denmark native has drawn attention from scouts, who will get a chance to see what he can do against strong competition.

Both teams lost three of their last five games. ... The Panthers’ last bowl win was in Detroit in 2013, when RB James Conner helped them beat Bowling Green 30-27. ... The Eagles lost their two bowl games under Creighton by an average of three points.