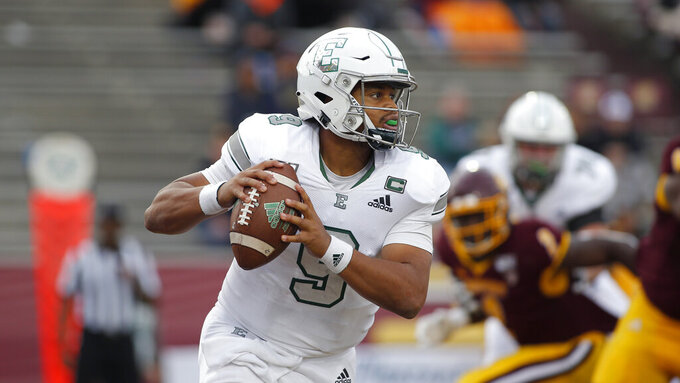 DETROIT (AP) — Pittsburgh and Eastern Michigan will meet in the Quick Lane Bowl hoping to end postseason droughts. The Panthers are 0-4 in bowls under coach Pat Narduzzi. The Eagles have lost all three of their bowls as a Division I football program.

One program will ends its bowl skid Thursday night in Detroit.

Pitt (7-5) had higher hopes for the postseason after surging to a 5-2 record with four straight victories, but losing three of four games pushed the Atlantic Coast Conference team to the lower-tier bowl in the Motor City.

Eastern Michigan (6-6) is not so picky, especially because Toledo, another Mid-American Conference program, is not playing this postseason despite being bowl eligible.

The Eagles have earned a bowl bid in consecutive years for the first time in school history and for the third time in four years under coach Chris Creighton. Before Creighton was hired in 2014, Eastern Michigan played in only one bowl game as a Division I program.

Here are some things to watch at Ford Field:

Pittsburgh’s strength is its defense while Eastern Michigan leans heavily on offense to win games.

The Panthers are averaging four-plus sacks a game, ranking second in the nation, and five players have at least nine sacks this season. They are giving up 302.5 yards per game, ranking 11th in the country, and have the 11th-ranked defense against the run and 20th against the pass.

NFL scouts will be evaluating players on both teams to search for potential draft picks and undrafted free agents.

Pitt cornerback Dane Jackson, a 6-foot senior, has the size, speed, skills and experience that should help him play on Sundays. The second-team All-ACC player has started 40 of 49 games.

“I’ve coached some first-round corners, he is all of that,” Narduzzi said. “He’s been a lockdown guy in our defense.”

Glass appears to be Eastern Michigan’s best quarterback since Charlie Batch, who went on to play in 15 NFL seasons in Detroit and Pittsburgh. The 6-foot, 209-pound senior needs 188 yards of offense to break Batch's single-season school record of 3,390 yards set in 1997. Glass is two touchdown passes from breaking Batch’s single-season mark of 23.

“I don’t know if the NFL can get over his height and all of that kind of stuff, but I think he’s a special quarterback,” Creighton said.

Narduzzi is wrapping up his fifth season as head coach, a gig he got after being the defensive coordinator at Michigan State from 2007-2014 and at Cincinnati the previous three seasons for Mark Dantonio.

“I don’t get where I am without him in the 11 years I spent from Cincinnati to Michigan State,” Narduzzi said.

Narduzzi is 35-19 at Pitt, where he has won 24 ACC games to trail only Clemson and Miami in the conference.

Pitt athletic director Heather Lyke was hired in March 2017, in part because of the success she had leading athletics at Eastern Michigan, where she hired Creighton.

The Eagles are expected to have more fans in the stands, playing about 30 miles from campus at the home of the Detroit Lions.