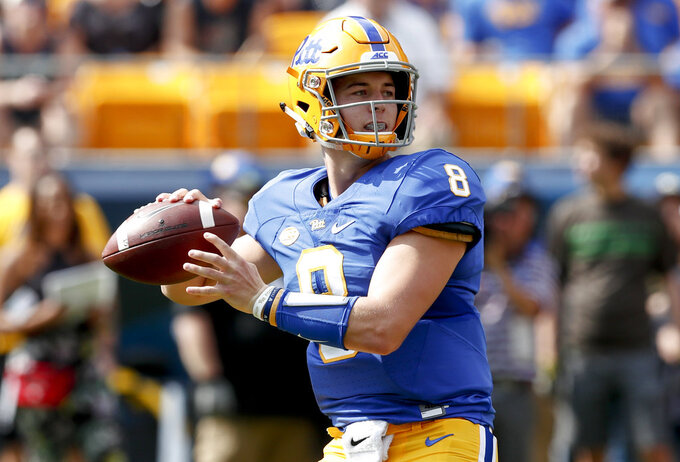 FILE - In this Oct. 6, 2018, file photo, Pittsburgh quarterback Kenny Pickett drops back to pass against Syracuse during an NCAA football game in Pittsburgh. Pickett and the Panthers face Notre Dame this week. (AP Photo/Keith Srakocic, File)

SOUTH BEND, Ind. (AP) — Wide receiver Miles Boykin is usually the tallest guy in a classroom at Notre Dame. The Irish offensive huddle is another matter.

"Once we had Chase (Claypool), Cole (Kmet), Alizé (Mack) and me, and I'm the smallest receiver out there on the field," said the 6-foot-4, 228-pound senior wideout, one of the shortest of six Notre Dame receivers and tight ends.

Pittsburgh coach Pat Narduzzi isn't laughing and knows his Panthers (3-3) will have their hands full when they take on undefeated No. 5 Notre Dame (6-0) on Saturday.

"I can't tell the difference between their tight ends and the receivers," Narduzzi said. "I think our guys are going to get confused. They put them all in 80 numbers and you can't tell. They're all big, they're all fast ... ."

"When offenses changed from much more of a pro-style to much more of a spread, you had a deeper talent pool," Kelly said. "Guys started to show up on that side of the ball that were longer and taller. Size does a lot of things. One of it is catching radius. They still have to run, but they give you other options. Blocking on the perimeter is another."

Prior to this season, Boykin was best remembered for his one-handed grab of an Ian Book pass and resulting 55-yard touchdown with 1:28 remaining in a 21-17 victory over LSU at the Citrus Bowl.

Now, with the 6-foot-and-change Book at quarterback, Boykin's numbers are going through the roof. The two have hooked up 19 times for 261 yards in Notre Dame's victories over Stanford (38-17) and Virginia Tech (45-23). For the season, Boykin has 28 receptions for 428 yards (15.3 yards per catch) and three touchdowns.

One of Boykin's running mates at wide receiver is Claypool, a just over 6-4 junior who has 18 catches for 200 yards and 2 TDs.

"Miles is a physical specimen," said Finke, who has 19 catches for 243 yards. "He's 6-foot-4, he has great hands, he runs good routes and he's fast, too. When you have Mike and Chase and all the big tight ends, it's a lot for a defense to worry about."

Narduzzi is impressed with Book, who comes into the game ranked third nationally with his 73.3 completion percentage (77 of 105 for 887 yards and nine touchdowns) and 13th in pass efficiency (170.7). Book has also rushed for 81 yards and 3 TDs.

The Panthers have settled on sophomore Kenny Pickett, who completed 11 of 20 passes for 137 yards, including a 68-yard TD pass play to Rafael Araujo-Lopes, in the Panthers' 44-37 overtime victory over Syracuse that ended a two-game losing streak. Pickett has completed 61.3 percent (87 of 142) of his passes for 880 yards and six TDs, but has five interceptions.

"They're running the ball as well as anybody we've seen this year," Kelly said. "This is an offense that wants to control the line of scrimmage. I like their offensive line. It's a veteran group."

Notre Dame's running game has received a boost from senior Dexter Williams, who has 343 yards and 4 TDs, one a 97-yarder against Virginia Tech, in the two games he has been back from a four-game suspension.

Notre Dame Stadium, which is expected to be sold out for the 267th straight time, Touchdown Jesus and other Irish football lore don't both Narduzzi.

"What about the history of Pittsburgh?" he said. "We've got some great history here. Notre Dame is a great institution, great place. I'm Catholic. I love Notre Dame, but this is a football game. We're not going to go to the basilica or go see Touchdown Jesus. We're not taking any tours. We're going to play a football game."

"You don't view anyone as a giant, especially in the game of football," Ollison said. "You respect all and fear none. You don't fear anybody."

The Panthers will be without senior captain and middle linebacker Quintin Wirginis, who had season-ending knee surgery Wednesday. He led the team in tackles (41), tackles for loss (7), QB sacks (3) and forced fumbles (2). His likely replacement is one of two sophomores — Elias Reynolds or Chase Pine. . Kelly indicated that RB Tony Jones Jr. and CB Troy Pride Jr. (ankles) and DE Daelin Hayes (stinger) will play. . Nine of the last 11 meetings between teams have been decided by single digits, with two ending in overtime, both at Notre Dame Stadium. . The Irish won 29-26 in three OTs in 2012, but Pitt won 36-33 in 2008 in four OTs, the longest game in both schools' histories.