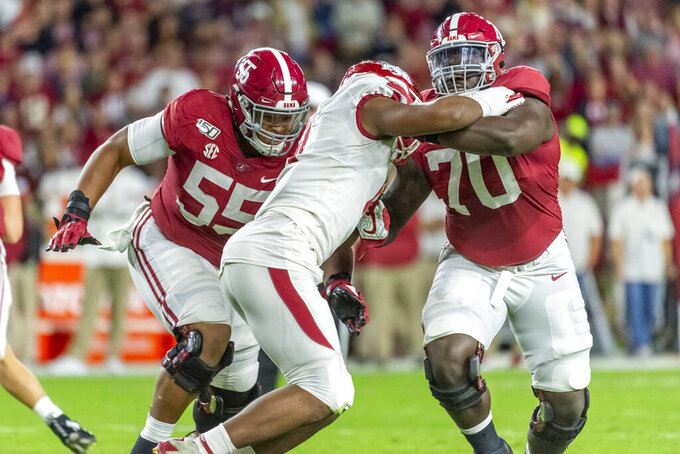 Purposely crashing into college football's best offensive line during Monday night's national championship game won't be as harrowing as a bullet passing through both of his cheeks, which is what happened when he tried to break up a fight on a street in August. But he knows there will be violence.

Alabama's offensive line this week won the Joe Moore Award as the best in the nation, paving the way for an offense averaging 535 yards and 48.2 points a game. The Tide (12-0) has allowed 17 sacks while averaging 5.1 yards per rush.

The Tide defense will run into an Ohio State offensive front that has recently been controlling the line of scrimmage better than it has all season.

The veteran Alabama line had two All-Americans and was the catalyst for Heisman Trophy-winning receiver DeVonta Smith and fellow Heisman finalists, running back Najee Harris and quarterback Mac Jones.

"They all have the same kind of competitive characteristics,” Alabama coach Nick Saban said. “They probably play more together as a unit and as a group in terms of how they communicate, how they combination block and all those things than any other group in football.”

The Alabama line will be the biggest one Ohio State has seen this season.

But Ohio State linebacker Pete Werner said it will be nothing new.

“We’ve seen it. We know what it’s like, so we’re ready to get after them.”

Ohio State's offensive front has distinguished itself this season, too, especially in the last few games after seeing its depth tested by COVID-19 issues.

Behind a unit led by guard Wyatt Davis — an All-American and the Big Ten Offensive Lineman of the Year — and including center Josh Myers and All-Big Ten tackle Thayer Munford, the Ohio State offense was the only one in the Power Five to average 250 yards rushing and 250 passing per game.

“They’re athletic. They’re physical,” said Tide nose guard DJ Dale. “They do a good job of controlling the line of scrimmage, knocking you out of your gap.”

Buckeyes running back Trey Sermon blew past the blocks of his front line for 331 yards in the Big Ten championship game win over Northwestern and 193 more in the national semifinal win over Clemson.

“Is it a great, great phenomenal line?” offensive coordinator Kevin Wilson said. "I don’t know about that, but they’re really good. They’re great kids. They give us great practice habits. They’re talented. We work really hard to try to put them in good schemes.

“So we’ll wait until Monday night to see how good a line it is."