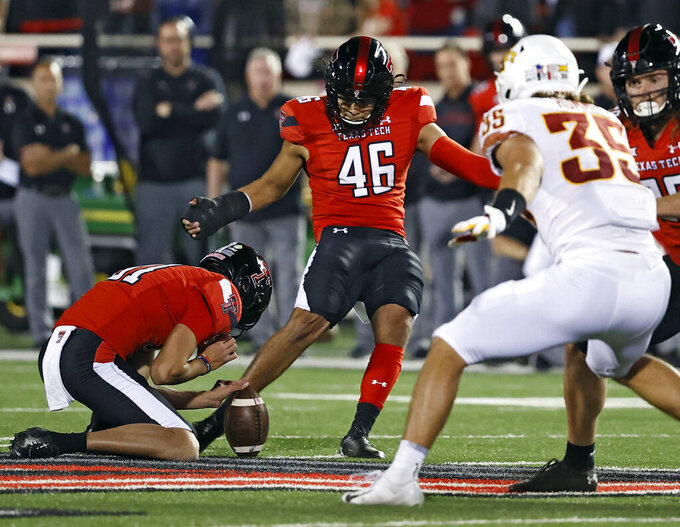 FILE - Texas Tech's Jonathan Garibay (46) kicks the winning 62-yard field goal during the second half of an NCAA college football game against Iowa State, Nov. 13, 2021, in Lubbock, Texas. Garibay is bypassing his final season of eligibility, instead opting to declare for the NFL draft after a season in which he set an NCAA record for the longest game-winning field goal. Garibay's 62-yard field goal on the final play against Iowa State on Nov. 13 as the longest kick in FBS to providing the winning points with less than a minute remaining. (AP Photo/Brad Tollefson, File)

LUBBOCK, Texas (AP) — Texas Tech kicker Jonathan Garibay is bypassing his final season of eligibility, opting to declare for the NFL draft after making the longest game-winning kick in FBS history and being the most accurate field goal kicker in school history.

That winner was among his school record 13 consecutive made field goals to start this past season. He finished 15-of-16, a 93.8% success rate that led the Big 12. His only miss was when he pushed a 53-yard attempt wide left on the final play of a 27-24 loss at Baylor two weeks after his 62-yarder.

Garibay, who redshirted in 2019 season after transferring from Riverside City College in his home state of California, finished 23 of 27 (85.2%) on field goals over two seasons and was 55 of 57 on extra points.

In his first game as the starting kicker in 2020, he made all four of his field goals, including a winning 25-yarder at the end of regulation against Baylor.