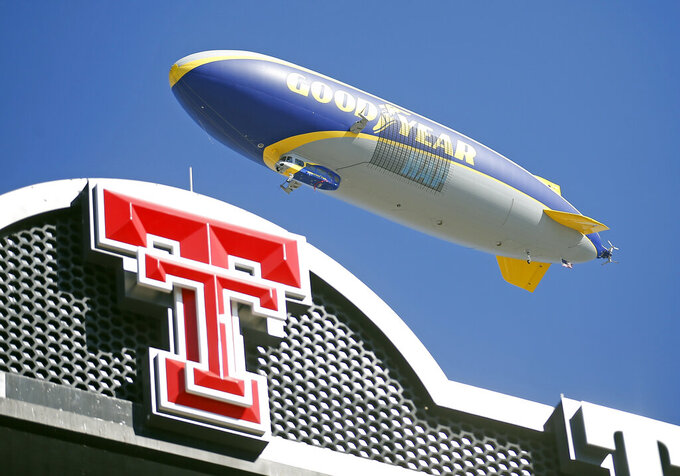 FILE - The Texas Tech logo is seen during the NCAA football game between Texas Tech and Iowa State on Oct. 21, 2017, in Lubbock, Texas. Texas Tech is planning a $200 million project consisting of a new four-story building in the south end zone that will include locker rooms, offices for coaches and a field-level club area that the Red Raiders will go through before games. Groundbreaking is anticipated after the 2022 season, with completion before the 2024 season. (Brad Tollefson/Lubbock Avalanche-Journal via AP, File)

LUBBOCK, Texas (AP) — Texas Tech is planning a $200 million project consisting of a new four-story building in the south end zone that will include locker rooms, offices for coaches and a field-level club area that the Red Raiders will go through before games.

That building will enclose the south end of Jones AT&T Stadium and connect by a skybridge to the school's sports performance center and the already-planned two-story Womble Football Center that will replace a current training facility.

“It’ll be as great of a layout as you will see in college football, with the practice field location, the adjacency of the indoor practice facility and then the connection to the stadium,” Texas Tech athletic director Kirby Hocutt said.

While revitalizing the south end zone, the project will also preserve the school’s famed Double T scoreboard. A new Double T scoreboard, which could be slightly larger than the original installed in 1978, will be atop the four-story building and flanked on each side by bell towers and video boards.

The south end zone project and Womble Football Center combined will contain space for both recruiting and players’ lounges, a new player locker room and a television studio for game day and social media content.

“We couldn’t be more excited for the future of our football program and what this facility will do in terms of player development and recruiting,” coach Joey McGuire said.

The school said the project will be largely funded through private fundraising and annual athletic department revenue streams, such as the sale of new premium seating. If Texas Tech regents approve the project at their meeting next month, groundbreaking would be planned for after the 2022 season, with the anticipated completion before the 2024 season.