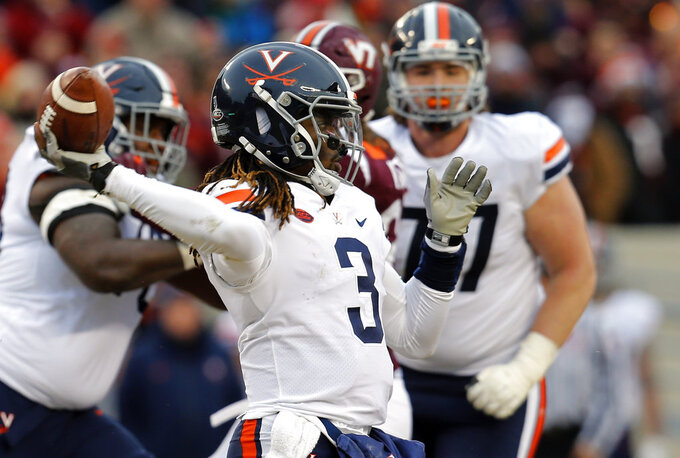 File-This Nov. 23, 2018, file photo shows Virginia quarterback Bryce Perkins (3) tossing a pass during the first half of an NCAA college football game against Virginia Tech in Blacksburg, Va. Perkins wasn't with Virginia when the Cavaliers made their first bowl appearance in six years last season, but he's heard enough about it to be in tune with what to push them to do differently this time around. (AP Photo/Steve Helber, File)

CHARLOTTESVILLE, Va. (AP) — Bryce Perkins wasn't with Virginia when the Cavaliers made their first bowl appearance in six years last season, but the quarterback has heard about the disappointing trip and is helping them prepare for a different outcome.

The Cavaliers do not want a repeat performance in the Belk Bowl Saturday against South Carolina.

A year ago, Virginia's Joe Reed returned the opening kickoff in the Military Bowl for a touchdown, staking the Cavaliers to a 7-0 lead after just 12 seconds. But the highlight reel went dark after that as the Cavaliers mustered just 175 yards of offense while Navy romped for 471 rushing yards en route to a 49-7 victory.

"They say in the locker room all the time (that after) the very first play, they thought they had the game in the bag and were going to have a really good game and then from there it just all went downhill," said Perkins, who played in the 2017 National Junior College Athletic Association national championship game. "We've just got to focus on a whole game, four quarters, and just keep going series by series and not let anything else affect us."

The Cavaliers (7-5) will play the Gamecocks (7-5) in Charlotte, North Carolina. It's the first time since 2006 that Virginia has gone to the postseason in back-to-back campaigns.

Virginia, however, will be trying to more on from more than just last season's bitter finish. The Cavaliers have dropped three of their last four games, including a crushing 34-31 overtime loss at Virginia Tech . The Hokies tied the game on a fumble recovery in the end zone with 1:51 left in regulation. They won by kicking a field goal in overtime and forcing Perkins, hobbled by an ankle injury, to fumble the ball away.

"We think about it a lot," Reed said of how last season ended and finishing on a better note this year. "We've spent all this time together getting extra work in. That's not the outcome that we want so we're doing everything we can this year to forget about the past, but also to work off it as well."

Perkins, a dual threat who ran for 112 yards despite an ankle injury against Virginia Tech, expects to be at 100 percent, or close, for the game against the Gamecocks, and has seen on film that that would help him greatly.

"Just the physicality," he said of his first impressions after watching the team from the Southeastern Conference on film. "They're big, they're strong and they're all fast at every spot so we have plays in place to exploit some of their weaknesses. That's what we've been working on here and I think we have a good game plan."

Third-year coach Bronco Mendenhall said the extra practices have been critical to the development of the team's up-and-coming players as he tries to build the program, but for seniors like safety Juan Thornhill, who will be playing his final game, much more is at stake in the year the leaders have hyped as setting 'a new standard' for Virginia football.

"I want to leave a foundation and work really hard for these guys so they can have something to look back on and be proud of," he said of his classmates. And Mendenhall makes sure they are reminded of what happened with Navy.

"We really don't talk too much about it," Thornhill said. "It's just that coach will remind us that 'You don't want this to happen again,' so we need to go out here and work hard so we don't have a replay of last year."