Vols' coach says this could be Saban's best Alabama team 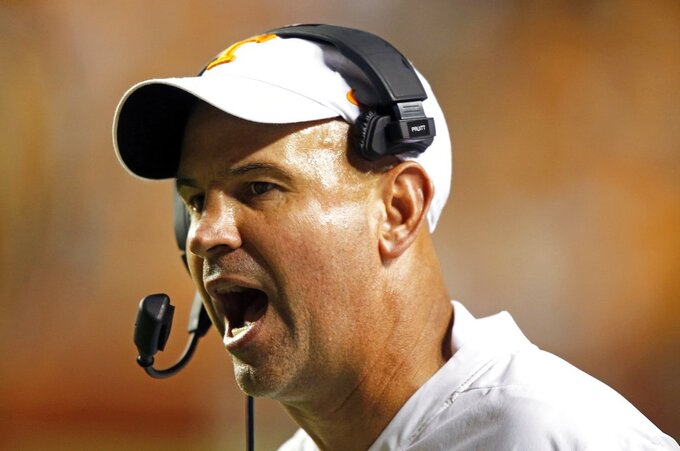 FILE - In this Sept. 22, 2018, file photo, Tennessee head coach Jeremy Pruitt yells at an official during the second half of an NCAA college football game against Florida in Knoxville, Tenn. Pruitt, a former defensive coordinator on Saban's Alabama staff, faces the toughest challenge of his debut season as head coach Saturday when Tennessee hosts the top-ranked Crimson Tide. (AP Photo/Wade Payne)

KNOXVILLE, Tenn. (AP) — Tennessee coach Jeremy Pruitt speaks from experience when he says this may be the best Alabama team of Nick Saban's 12-year tenure.

Pruitt was part of Saban's staff for four national championship teams at Alabama and spent the 2016 and 2017 seasons as the Crimson Tide's defensive coordinator . Now he's a first-year head coach preparing to face the top-ranked Tide.

Alabama (7-0, 4-0 SEC) leads all Football Bowl Subdivision teams in scoring this year with 53.6 points per game.

"They really had to try hard not to score 100 points a couple of games," Pruitt quipped.

Pruitt is trying to take the lessons he learned at Alabama to help build a consistent winner at Tennessee. His former boss believes Pruitt is headed in the right direction.

Tennessee (3-3, 1-2) snapped an 11-game SEC losing streak last week by winning 30-24 at Auburn , which was ranked 21st at the time. The Vols enter Saturday's game as 28 ½-point underdogs, but Saban believes Tennessee has made "pretty phenomenal" progress since the start of the season.

"This is as well coached a team as we've played all year long, and you have to give a lot of credit to Jeremy and his staff with what they've been able to do there in a short period of time," said Saban, who owns a 14-0 record against his former assistants.

Pruitt had been working as a high school assistant coach when he joined Alabama's staff as a director of player development in 2007, Saban's debut season. Pruitt spent three seasons in that role before working as defensive backs coach in 2010-12. He left for stints as a defensive coordinator at Florida State and Georgia before returning to Alabama in 2016.

Since taking over Tennessee's program, Pruitt says he hasn't contacted Saban much for advice.

"I don't think it's fair for me to call and ask him questions," Pruitt said. "Not that he wouldn't help me, I really believe he would, but we're competing against each other every single day in recruiting. It's one of the biggest rivalries out there, so I don't feel like I should put him in that situation."

Pruitt has reached out often to one of Saban's predecessors at Alabama.

After Tennessee upset Auburn last week, Pruitt received a call from Gene Stallings, who coached him at Alabama. Pruitt said they've spoken to each other a number of times this season. Tennessee defensive coordinator Kevin Sherrer and offensive line coach Will Friend also played for Stallings at Alabama.

"A lot of the lessons I learned playing with coach Stallings, we try to implement today," Pruitt said. "He told me a couple of weeks ago about some of the things he did when he first got to Texas A&M (in 1965). That was something I actually used."

Pruitt isn't accustomed to this type of rebuilding situation.

In the first five weeks of the season, Tennessee suffered more losses than Pruitt experienced in his entire two-year stint as Alabama's defensive coordinator. Pruitt inherited a program that set a school record for losses and went winless in SEC competition last season.

"We were very poor at the beginning of the year," Pruitt said. "We're still not great - I can assure you that - but we're working hard to improve."

Tennessee's players say Pruitt has remained patient while making sure the Vols continue believing in themselves.

Alabama linebacker Mack Wilson referenced the obscene gesture that former Tennessee defensive back Rashaan Gaulden made toward the crowd during a 45-7 loss at Alabama last season and noted that "you don't see (any) of that undisciplined-type stuff" from the Vols anymore.

"He changed a lot about their program from what he learned from here, obviously," Wilson said. "I can tell he brought the winning attitude to Tennessee with how those guys responded to adversity and from them losing and stuff like that.

"I'm very impressed with how he has those guys rolling right now."