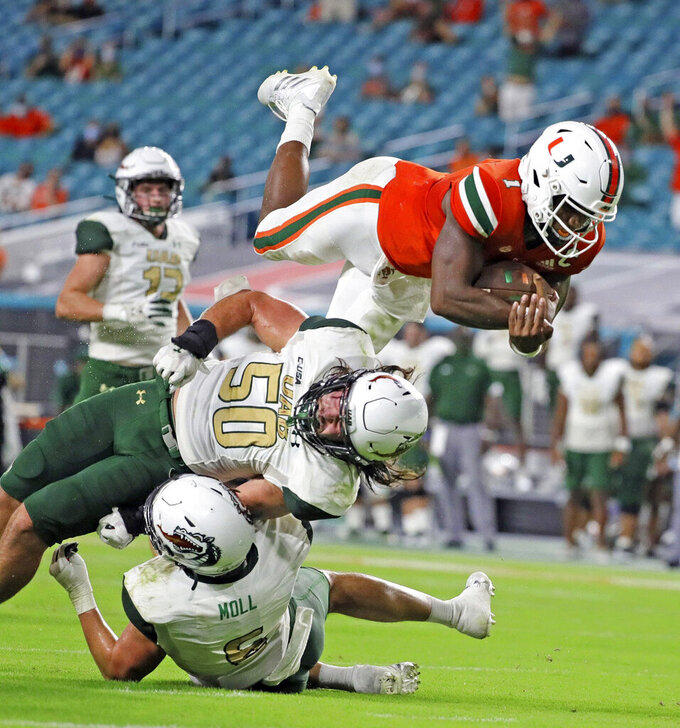 The stakes have not recently been what they used to be for the Florida State-Miami rivalry, but the Seminoles and Hurricanes usually put on a good show.

A pandemic-altered college football season has helped put FSU-Miami in the spotlight again this weekend. The 12th-ranked Hurricanes (2-0) are hosting ESPN's “College GameDay,” and for the second straight week playing in primetime.

The Southeastern Conference also kicks off Saturday, putting three of the power five conferences in play.

The Big Ten and Pac-12 are still at least a month away, but the college football menu is starting to fill up.

Big football games involving Kentucky are starting to become more typical in the SEC. The Wildcats have one of the best offensive lines in the country and could qualify as a dark horse in an East Division race that has No. 4 Georgia and No. 5 Florida as favorites.

King has accounted for five touchdowns (four passing and one rushing) and not yet thrown an interception for the Hurricanes. The Houston transfer and Miami get a third straight national stage to show off the U.'s new up-tempo offense.

Another stellar performance and King could grab hold of that early season Heisman frontrunner status — which often isn't worth much in the long run.

Also, keep an eye on King's teammate, Cam'Ron Harris, who is averaging 10.31 yards per carry.

0.93 ——Average yards per carry allowed by No. 21 Pitt's top-ranked rushing defense. The numbers have come against bad competition, but the Panthers' defense has been smothering. No. 24 Louisville and star RB Javian Hawkins will provide a much stiffer test for Pitt on Saturday.

42-9 — Average score in Alabama's last five opening victories. All of those have been nonconference games at neutral sites. The second-ranked Crimson Tide opens at Missouri as about a four-touchdown favorite on Saturday.

7-6 — Lane Kiffin's record in his one SEC season as coach at Tennessee. Kiffin bolted for USC after that one year. His unusual career path brought him back to the SEC as Alabama's offensive coordinator and has now led him to Ole Miss. Kiffin's first game as Rebels coach is at home against No. 5 Florida.

856 — Combined yards passing for Texas Tech quarterback Alan Bowman and Texas quarterback Sam Ehlinger in their opening games It's early, Bowman and Ehlinger are Nos. 1 and 2 in the country in passing yards and they play Saturday in Lubbock.

Before you downplay the Miners 2-1 start, with both victories coming against FCS teams, realize UTEP is 2-34 over the last three seasons. That includes a loss to an FCS team.

Pre-pandemic this looked like a make-or-break season for Muschamp, who is 26-26 and 15-17 in the SEC in four season with the Gamecocks.

South Carolina opens the season at home against No. 16 Tennessee.