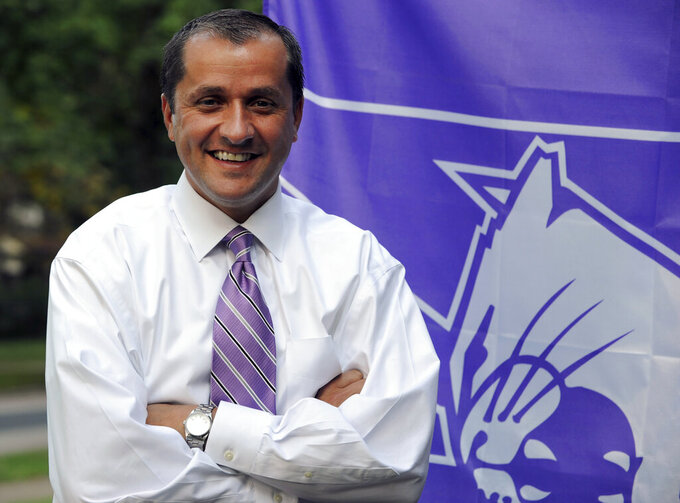 Northwestern University Athletic Director Jim Phillips poses outside his home in Wilmette, Ill., in this Oct. 9, 2008, photo. The Atlantic Coast Conference is finalizing a deal to make Northwestern athletic director Jim Phillips the league's next commissioner. Two people with knowledge of the situation told The Associated Press they expected an agreement to be reached with Phillips and the conference soon. (John J. Kim/Chicago Sun-Times via AP) 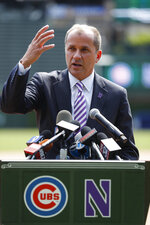 The Atlantic Coast Conference hired Northwestern athletic director Jim Phillips on Monday to be the league’s next commissioner, replacing the retiring John Swofford.

Phillips has been Northwestern’s AD since 2008, leading the athletic department through a period of success in competition and growth in facilities. During his tenure the Wildcats have been to nine bowl games and won Big Ten division titles in football; the men's basketball team made its first NCAA tournament appearance; and women's lacrosse won three national titles.

“Serving Northwestern student-athletes, staff and the greater Wildcats family for the last 13 years has been the privilege of my professional life,” Phillips said in a statement. "My career has been dedicated to the development and betterment of student-athletes, and I am thrilled for this once-in-a-lifetime chance to guide one of the most prestigious and accomplished athletic organizations in the world.”

“Jim is well-respected throughout college athletics and knows the enterprise inside and out,” Swofford said in a statement. “As I’ve said many times before, having been an athletic director prior to sitting in this chair is a tremendous benefit, and that will serve him well. Jim will do an excellent job and I will be here to assist with the transition as much, or as little, as necessary.”

Phillips was a candidate to become Big Ten commissioner when the conference was searching for a replacement for Jim Delany last year, but ultimately the league went outside of college athletics and hired former NFL executive Kevin Warren.

A person with knowledge of the situation told AP that Phillips agreed to a five-year contract. The person spoke on condition of anonymity because the ACC had not released terms of Phillips' deal.

The ACC announced Swofford’s retirement in June, though he was to continue in the job until a successor was hired and to aid the transition.

The 72-year-old Swofford became commissioner in 1997 of a very different ACC, which had only nine members at the time and remained basketball-focused. Swofford eventually led the ACC through multiple waves of expansion to form a 15-team conference stretching along nearly the entire Eastern Seaboard and west into Kentucky and Indiana.

It is a diverse mix of private schools such as Duke, Syracuse and Boston College and public universities such as Clemson, Florida State and Virginia Tech. Plus, Notre Dame in all sports but football and hockey. The Fighting Irish are playing as an ACC school in football this season because of the COVID-19 pandemic.

The ACC has never been stronger in football and has a long-term television deal with ESPN that include its own network.

Phillips' job will be to guide the conference through the next wave of NCAA reforms, such as name, image and likeness compensation, and the changing media landscape.

“Jim is one of the most talented athletic administrators in the country and uniquely qualified to successfully and seamlessly take over the helm of the ACC,” said Syracuse President Kent Syverud, the chairman of the ACC's board.