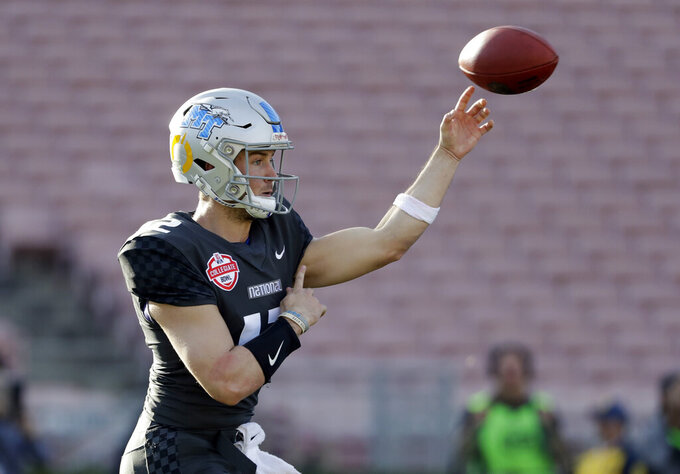 PASADENA, Calif. (AP) — It may not seem the most vexing of losing streaks, the eighth NFL Players Association Collegiate Bowl being an all-star game, but after the American team knocked off their National counterparts 10-7 on Saturday at the Rose Bowl, they celebrated as if they had ended an age-old demon.

"You could see a group of guys come together today," said Bears defensive coordinator Chuck Pagano, who coached the American squad. "Down seven at the half and come back and pull this thing out.

The National squad was in familiar position when it took a 7-0 lead in the second quarter on a punishing 4-yard touchdown run my game MVP Wes Hills of Slippery Rock.

But the American team finally answered. It got a spectacular 22-yard touchdown catch from Colorado's Juwann Winfree to tie it and then a 43-yard field goal from North Dakota's Rafael Gaglianone in the third quarter.

"This is a day I'll ever forget, our coaching staff will never forget and those kids will never forget," Pagano said. "It was amazing. Just to see their faces, and the love and passion that they have for this game and their teammates."

The game is designed to feature players on the fringes of the NFL draft, and those who might go undrafted and invited to camp.

No player may have done more for himself that Hills, who rushed for 78 yards on 10 carries, showing explosiveness and determination. His play during the week of practice earned him an invite Thursday to next week's Senior Bowl.

The 6-foot-2, 218-pound Hills went under the collegiate radar despite rushing for over 2,100 yards and 35 touchdowns at New Jersey's Wildwood High School. He had only two offers, to Towson and Delaware.

He played three years at Delaware before becoming academically ineligible and transferring to Slippery Rock.

"I hit a bump in the road at Delaware and was blessed with another opportunity at Slippery Rock, and I wasn't going to let that opportunity go to waste," Hills said. "It's been a long road."

After a week of rain during practice, the teams had sunshine throughout the game but both offenses struggled to get untracked. The American team managed just 311 total yards of offense, and the National team only 382.

The teams alternated running backs and quarterbacks throughout. Washington's Jake Browning led all quarterbacks with 114 yards, completing 9-of-17 passes despite several drops.

Rhode Island's JaJuan Lawson completed 8 of 13 for 83 yards, including the 22-yard touchdown pass to the diving Winfree.

"That was a heck of a throw and a great catch," Pagano said. "He climbed the ladder on that one and went up and got that thing."

Browning tried to rally the National team, but with no timeouts, the game ended when he scrambled and was tackled at the American 14e to end a 68-yard drive.

"When the defense had to make a play, they made a play," Pagano said. "The defense forced three turnovers, which was huge.

"At the end, they had no timeouts. The big thing for us was just to keep them in bounds."

American cornerback Nate Brooks, out of North Texas, intercepted Browning's pass in the third quarter to set up Winfree's touchdown.