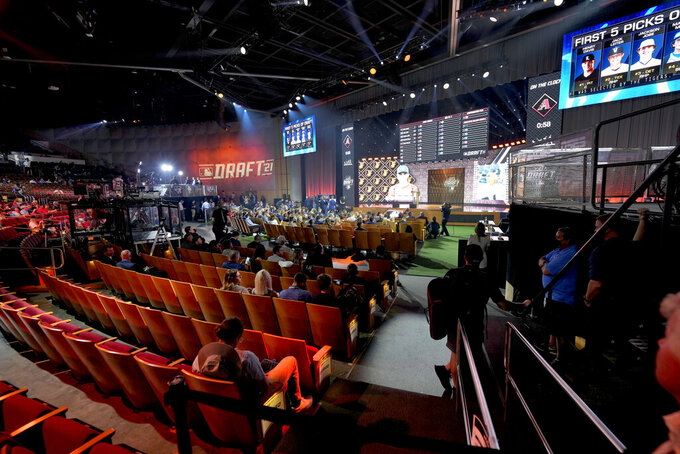 Fans watch during the first round of the 2021 MLB baseball draft, Sunday, July 11, 2021, in Denver. (AP Photo/David Zalubowski)

Mike Trout has helped the Los Angeles Angels score a lot of runs over the years. Preventing them has been a bigger issue.

LA's scouting department is going all out to solve that problem.

The Angels became the first club ever to select exclusively pitchers over a full amateur draft this week when they took 20 straight hurlers. The arms race began with Miami (Ohio) right-hander Sam Bachman at No. 9 overall Sunday and ended with TCU righty Marcelo Perez in the 20th round on Tuesday.

Scouting director Matt Swanson said the team expected to go heavy on pitching in the draft, knowing it was an area of need in the organization. He didn't expect them to forego position players entirely, though.

“You can never have enough pitching,” Swanson said. “It’s a good problem to have."

At full health, Los Angeles' lineup is loaded with stars, including Trout, Shohei Ohtani, Jared Walsh and Anthony Rendon. The rotation — aside from two-way phenom Ohtani — not so much.

Trout has won three MVP awards but only been to the postseason once since debuting in 2011. The Angels pitching is a prime reason why.

The Miami Marlins picked only pitchers in last year's five-round draft, which was drastically shortened by Major League Baseball after the coronavirus pandemic wiped out nearly all amateur and minor league ball. The draft had been 40 rounds prior to that, but even then, no team had taken a pitcher with every pick through the first 20 rounds.

Nineteen of the pitchers selected by Los Angeles came from college, with 12th-rounder Mason Albright from IMG Academy in Florida the only prep arm. That means reinforcements could be close for a club with a 4.89 ERA this season, 26th in the majors.

“This group of pitchers is going to be in an awesome situation to thrive really quick out the door and hopefully impact the upper levels in short order, and you never know, but hopefully in Anaheim sooner or later,” Swanson said.

Several other teams also stocked up on arms. The Los Angeles Dodgers took pitchers with their first 15 picks before sprinkling in position players in the 16th and 18th rounds. The Cleveland Indians ended up with 19 pitchers out of 21 picks.

The first round of this year's draft was held Sunday night at Denver's Bellco Theater, with Baseball Commissioner Rob Manfred announcing the picks as Major League Baseball moved the event from June to July's All-Star weekend. Days 2 and 3 were held via conference call, with the draft wrapping Tuesday afternoon.

The Astros got perhaps the most famous name on Day 3 with Liberty second baseman Will Wagner, the son of former Houston closer Billy Wagner. The elder Wagner is the franchise's career saves leader at 225, while the younger hit .333 with seven homers this spring.

A day after New York native Jacob Steinmetz became the first known practicing Orthodox Jewish player selected, the Nationals selected a Jewish player who observes the Sabbath in catcher Elie Kligman from Las Vegas. Steinmetz was taken in the third round by the Arizona Diamondbacks, and Kligman went to Washington in the 20th round.

Steinmetz is a right-handed pitcher who plays on the Sabbath, but he walks to games on those days to avoid taking transportation. He also eats only Kosher food.

Kligman told the Jewish Telegraph Agency in April that he won't play between sundown Friday and sundown Saturday, but that he didn't think it had to hinder his baseball career.

“Most guys don’t play 162 games a year. If I’m a catcher, not playing three days in the week or two days in the week is pretty normal, so I don’t think it would be that different from other guys,” he said. “I would just be missing different days.”

No Orthodox Jewish player has played in the major leagues.

Good news for Dabo Swinney: the Clemson football coach is likely to get quarterback/wide receiver commit Will Taylor to campus after the two-sport star fell all the way to the 19th round to Texas. The Rangers are unlikely to have the bonus pool space needed to sign the outfielder away from campus.

Another Clemson quarterback commit, Bubba Chandler, was taken as a right-handed pitcher by Pittsburgh in the third round and said he plans to sign.

Connecticut shortstop Michael Sirota, great-nephew of Yankees Hall of Famer Whitey Ford, was taken by the Dodgers in the 16th round.

The Milwaukee Brewers finished their draft with an unusual pick — 28-year-old junior college right-hander Samuel Mendez. A former semipro basketball player in the Dominican Republic, Mendez gave pitching a try at Cisco College in Texas and struck out 100 batters over 65 1/3 innings as a freshman.