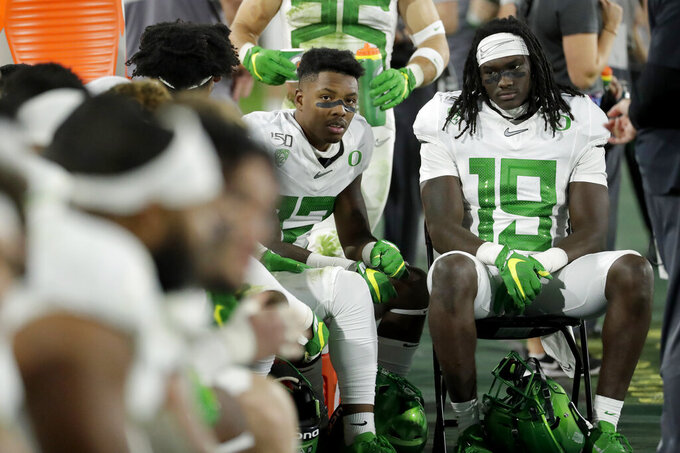 No. 2 Ohio State gained some ground on No. 1 LSU in The Associated Press college football poll and Oregon dropped out of the top 10 after being upset by Arizona State.

The Tigers remained No. 1 for the fifth straight week in the AP Top 25 presented by Regions Bank, receiving 50 first-places votes. The Buckeyes got nine first-place votes, up from five last week. No. 3 Clemson received three first-place votes. No. 4 Georgia and No. 5 Alabama also held their spots.

Ohio State is coming off a 28-17 victory over Penn State that dropped the Nittany Lions three spots to No. 12.

Oregon dropped eight spots to No. 14 after losing 31-28 at Arizona State. That allowed Utah to move up a spot to No. 6 and Oklahoma to No. 7. Florida, Minnesota and Michigan round out the top 10.

The Tide should tie Bobby Bowden’s Seminoles this season and surpass them in next year’s preseason poll. There are typically 16 polls in a season, counting preseason and final. At that rate, Alabama would pass the record Nebraska set under coach Tom Osborne in Week 5 of the 2029 season.

FYI, Nick Saban would be about a month shy of his 78th birthday.

— No. 24 Navy jumped into the rankings, knocking out American Athletic Conference rival SMU.

— No. 25 Southern California finished its regular season by beating rival UCLA and jumping back into the rankings. The Trojans have had two previous one-week stays in the poll this season.

— Texas A&M fell out after a brief return to the AP Top 25. The Aggies lost for the fourth time, this time to Georgia. All of A&M’s losses have come against teams ranked in the current top 16. It gets no easier for the Aggies next week. They will face No. 1 LSU and become the first team in the history of the AP poll, which dates to 1936, to face a No. 1 three times in one season. Playing the No. 1 team twice in one season has happened 30 times previously, and that’s including seven teams that played one of those games in the postseason.

No. 2 Ohio State at No. 10 Michigan. Is THIS the year Jim Harbaugh finally breaks through against the Buckeyes?

No. 5 Alabama at No. 16 Auburn. All eyes on Alabama backup quarterback Mac Jones in the Iron Bowl.

No. 7 Oklahoma at No. 21 Oklahoma State. Bedlam is for bragging rights and the Sooners’ playoff hopes.

No. 13 Wisconsin at No. 9 Minnesota. The winner goes to the Big Ten championship game as West Division champion.

No. 18 Cincinnati at No. 17 Memphis. The Tigers need a victory to clinch the AAC West — and a rematch at home with the Bearcats the next week.